The State security officers thought namely that they had found a primitive copying device.

When the official broadcasting of Radio Free Europe went on air at 11 o'clock in the morning on 1 May 1951 on medium waves at 416.2 metres, it took only two minutes for the noise of Communist jamming stations to take over. Except for a short break in August 1968, the jamming lasted until December 1988. This was nothing new. In the same way, the German occupation administration tried to prevent people from listening to the foreign broadcasts from Moscow, London or Washington during WWII. All registered radio sets were sealed in order to prevent the reception of short wave radio broadcasts. Although listening to foreign radio was punishable by death, a very simple device appeared already in those days which enabled listeners to receive short wave foreign radio broadcasts. It was known under the name "Churchillka", indicating that people in the protectorate Böhmen und Mähren listened mostly to programmes from London.

What did it look like? It was a coil which was inserted between the antenna and earthing port of the radio receiver, creating a passive circuit which enabled radio reception on forbidden wavelengths. It performed even better when it was connected to the heating lamp of the oscillator, but for that it was necessary to open the back side of the radio set, which was usually sealed. 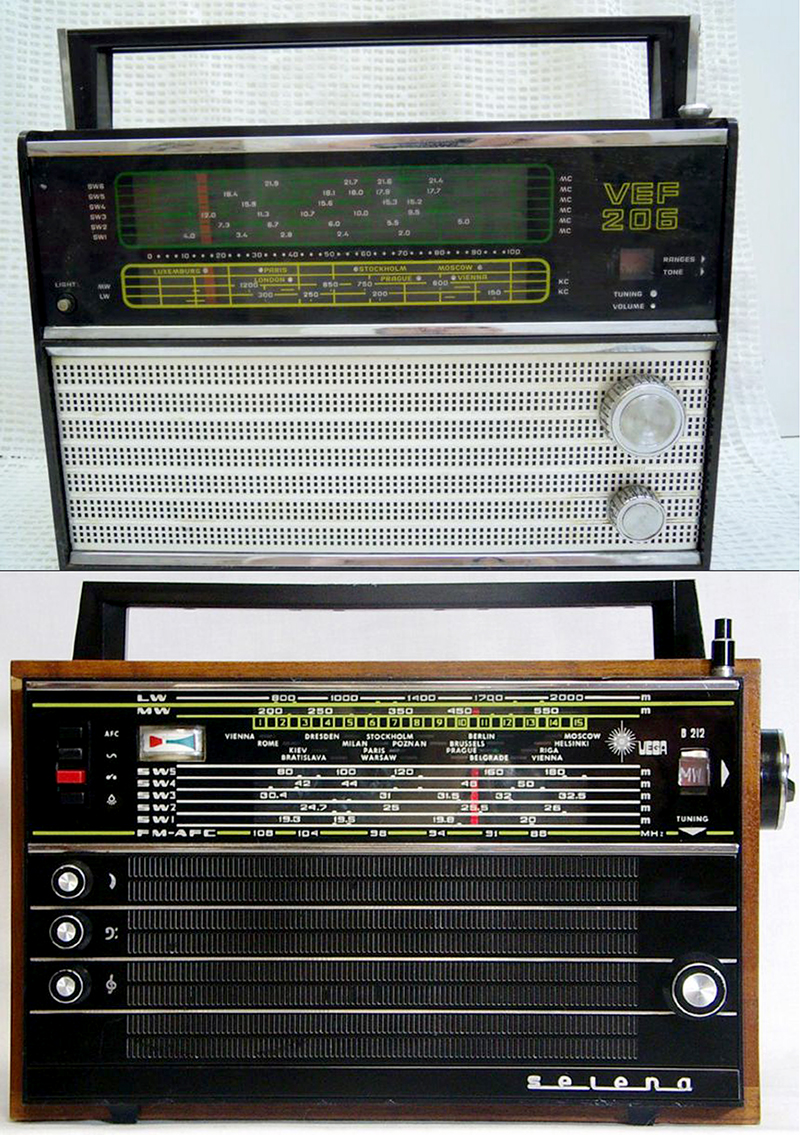 Jamming remained the main problem while listening to the broadcasts of Radio Free Europe. It was called "radio defence" in the Communist jargon and it was very efficient on the medium waves. A much lower efficiency was obtained with broadcasters working in the short wave range. The character of short waves is such that even with very strong transmitters, the direct, ground level wave has a reach of only fifteen kilometres, whereas the spatial wave, refracted from the ionosphere, is audible thousands of kilometres away. Under favourable conditions the radio signal can circle the globe, which then produces an echo for the listeners.

Radio Free Europe defended itself against jamming in several ways. First of all, it owned a large number of transmitters stationed in Portugal outside the town of Gloria. They broadcast on many frequencies, making the jamming more difficult. Next, a "dynamic compressor" was used which took care of a maximum enhancement of the transmitted signal. Moreover, the switching on and off of various broadcasting frequencies aimed at the audience in Czechoslovakia at concrete times of both day and night made use of the fact that the long-distance jamming stations were positioned behind the Ural mountains in the Soviet Union and that the spreading of their signal in Central Europe was by far not as efficient, because the Soviets had to work on the exact frequencies of the Radio Free Europe transmitters, which of course utilised frequencies most suitable for them.  What proved much more efficient for the Communists was local jamming.  But then again, it only had the reach of fifteen kilometres, as mentioned before. Tens of local transmitters were needed for one frequency. The capital of Prague was thus surrounded by 29 short wave transmitters. The most famous one of them was located in the centre of town on the Strahov hill near the university dormitories. It went by the code name Zuzana.

One of the ways to curb the listening to foreign radio was the shortage of appropriate radio sets produced in Czechoslovakia.The short wave range suited for the daytime reception of Radio Free Europe, namely the 13, 16 and 19 - metre range, was available only on one set produced in the eighties. However, there were also two Soviet radios on the market, produced under license. They were copies of an old Japanese Panasonic transistor radio. They were sold under the name Selena, which however did not have the 13-metre band width, and VEF 206 (fig. 3). Finally, most radio casette recorders produced in Western Europe and sold in the special Tuzex shops for hard currency had the 16 and 19 - metre bandwidth, good for the daytime listening to Radio Free Europe.

At the beginning of 1984, Radio Free Euroe broadcast instructions for a convertor which they called KONY 84. This simple apparatus enabled a transformation of short waves with the 13, 16 and 19- metre wavelength to the medium wave bandwidth available on all common radio sets. Although broadcasting a plan for a radio might sound complicated, I myself manged to build this apparatus according to the instructions. I used it successfully on an almost daily basis until the fall of the Communist regime. 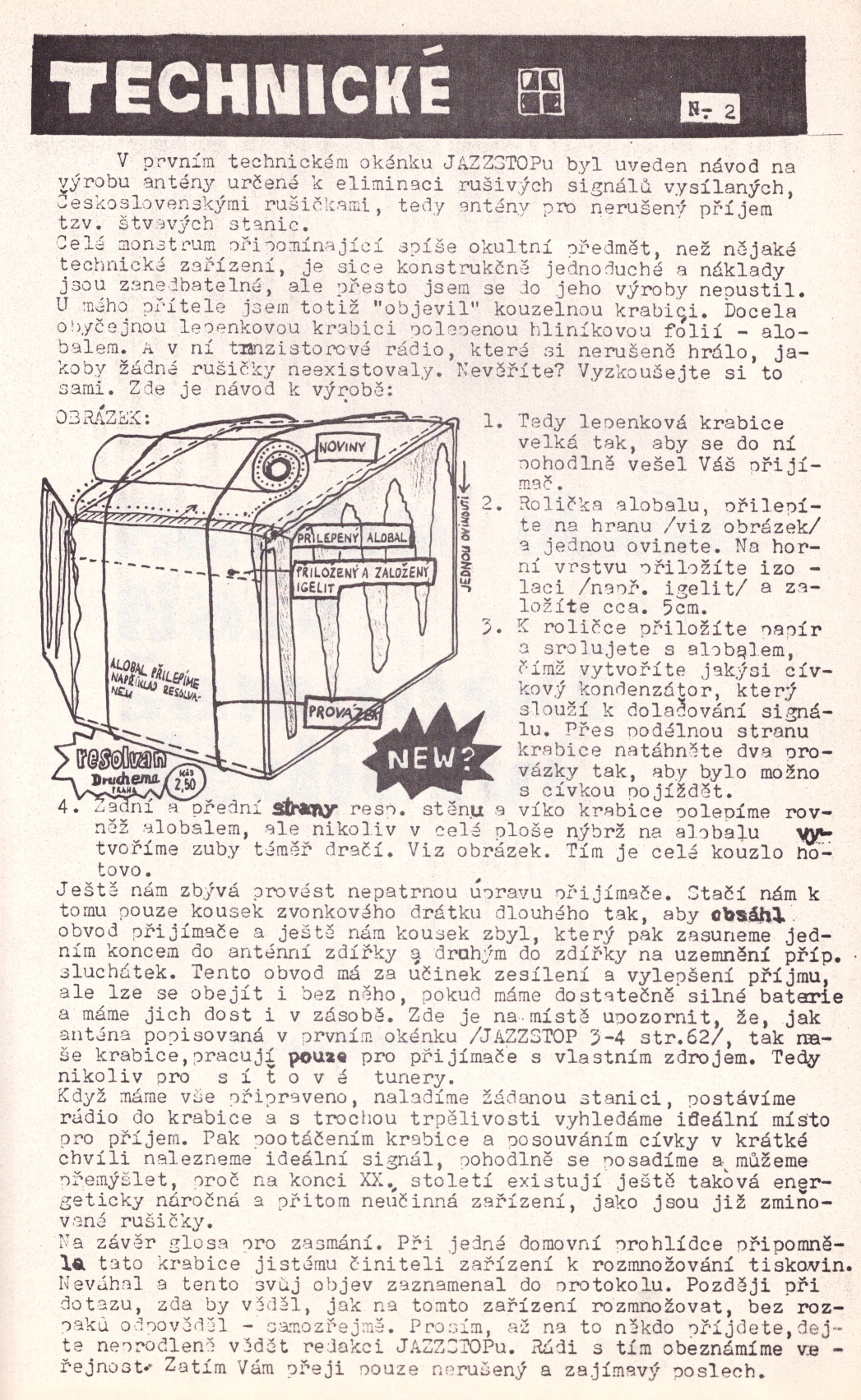 This convertor however could only be successfully used in places where it was not jammed by the local jamming station, namely in villages or in small towns. In Prague the jamming was so intense that this apparatus could not be used. In March 1984 therefore Radio Free Europe broadcast a manual for construction of a directional antenna, called "Směrovka 84" by its authors.  The purpose of this installation was to remove the surface jamming and to enable an undisturbed reception even in large cities. In principle it consisted of two loops of different size made from a co-axial cable which was used for transporting the television signal and which was commonly available (fig. 4). (sound demonstration). The instructions have been preserved in the Radio Free Europe archive. I also managed to build this antenna and during my compulsory military service I used it succesfully even in the building of the military intelligence in Prague in the Na Ořechovce street. Its efficiency was truly astonishing. The co-axial cable was connected to the antenna and earthing port of the receiver and the jamming disappeared completely. If the radio set did not have these ports, it was sufficient to wrap it in several coils of wire and to connect the antenna cable to their ends.

For a long time I thought that it was impossible to invent a simpler way to get rid of the jamming. But in 1987 Jiří Gruntorád, a dissident who had spent more than four years in Communist prisons for copying samizdats, showed me a cardboard box covered in aluminium foil and tied with a string. He claimed that is served to remove the jamming of Radio Free Europe. Because I am an electrotechnician by education, I did not believe a single word of his. It could not be as simple as this! (fig. 5) So I constructed the box based on his instructions - and I was amazed. After putting this simple "apparatus" together, the jamming stations practically ceased to exist and to influence the listening to Radio Free Europe in any way. The principle was simple. You put the radio into the box and tuned in to the broadcasting of the radio station, with the jamming. You then turned the box toward South where the transmitters were located in Portugal and by turning the aluminium foil you completely eliminated the influence of jamming. In principle, the receiver was placed in a passive resonance circuit which significantly increased the directionality of the reception. By a slight turning of the box the jamming disappeared completely. Based on latest research it is probable that these instructions, too, came from the workshop of the technicians at Radio Free Europe. Instructions for the construction of this simple device were discovered in the Libri Prohibiti samizdat library, founded and kept by the same Mr Jiří Gruntorád. They were obviously mailed by post, and quite clearly printed on an offset machine and held together with a staple which was not to be found in the Eastern bloc. In 1988 I offered these instructions to editors of Radio Free Europe so that they could broadcast them, not knowing that the station itself was the author of this ingeniously simple device. However they declined to broadcast the instructions in their programme. The instructions for the box were then reprinted by the samizdat magazine JAZZSTOP (fig. 6).

When the State security confiscated this box dring a house search on 22 October 1987, they did not know its purpose. So they called on the institute of criminology to find out what it was meant for. The State security officers thought namely that they had found a primitive copying device. The specialists from the institute of criminology did not manage to uncover the real purpose, however they excluded the possibility that anything could be printed on the device, because they did not find any residues of colour. During one interrogation, the State security officer could not hold back his emotions. He shouted at the interrogated person that he would be punished dearly for the leaflet printing device. When the interrogated man asked him whether he had an idea how one could print on it, he answered "of course". Dear readers, if you crack this one, I would be very grateful to you. Nobody has managed to solve this riddle so far.

Pictures: The items confiscated by the State Security in Jiří Gruntorád house on 22 October 1987. Item Nr.7 - the "device".

The institute of criminology finding about the "device", dated 4 March 1988. 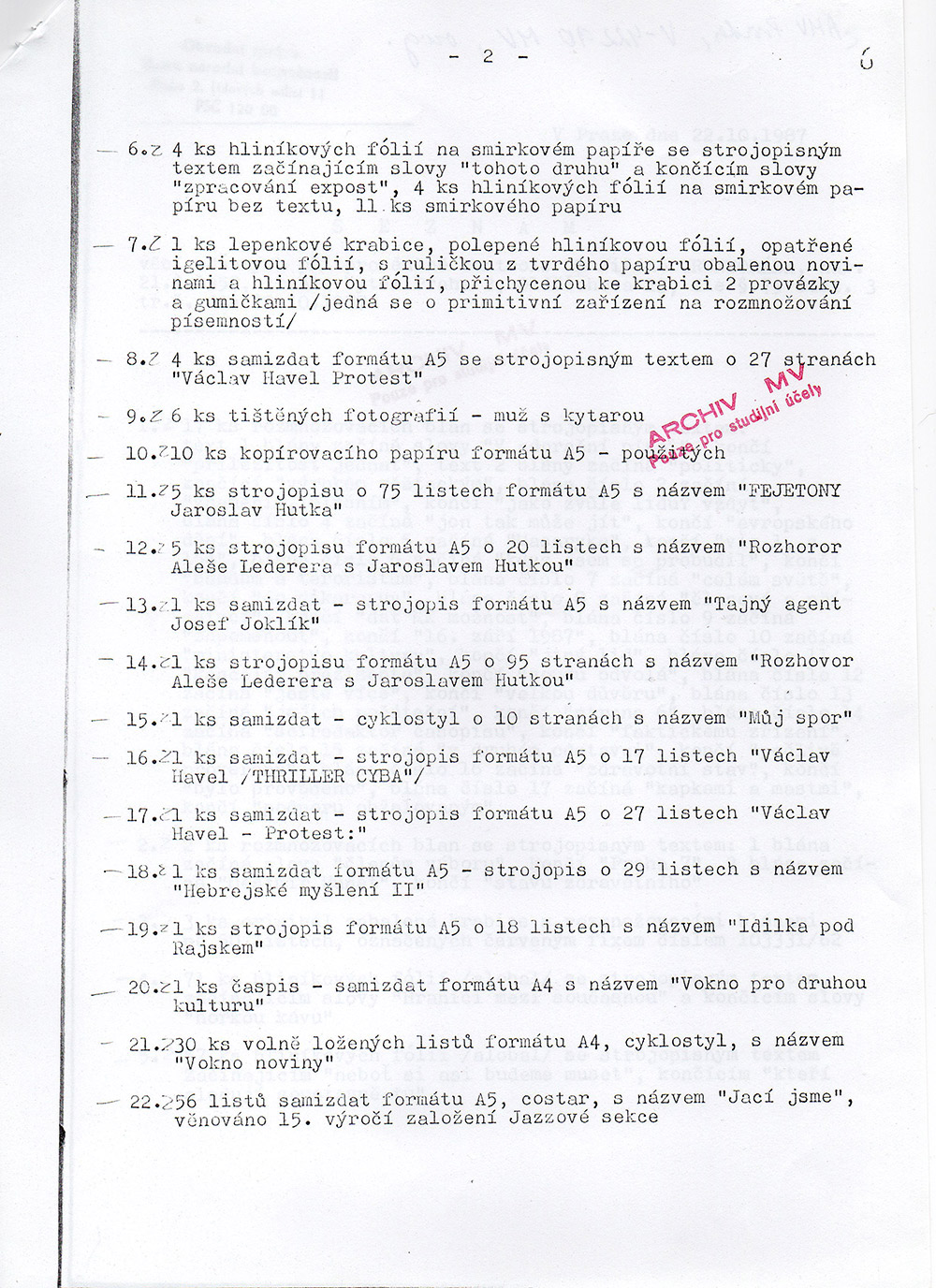 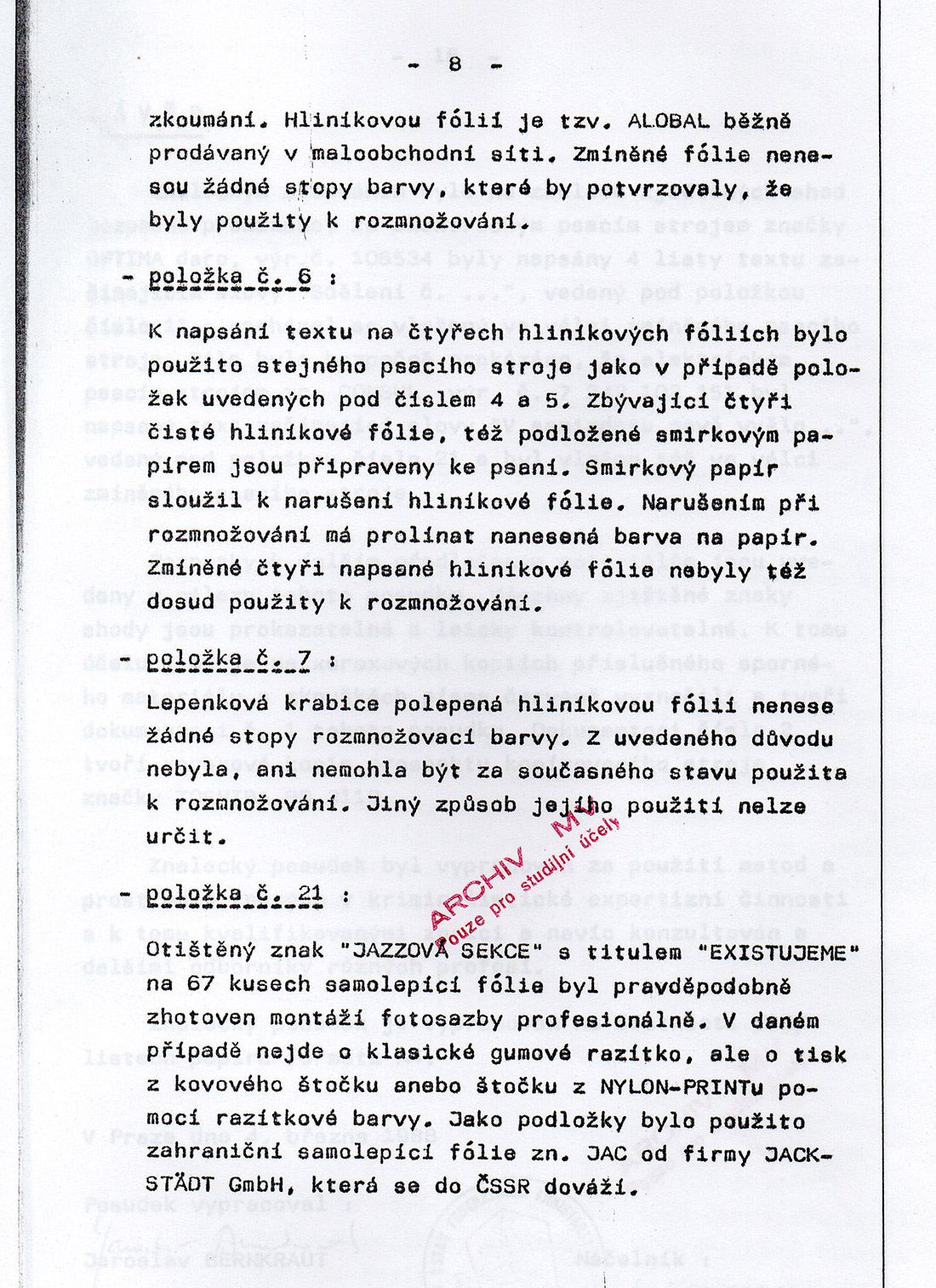 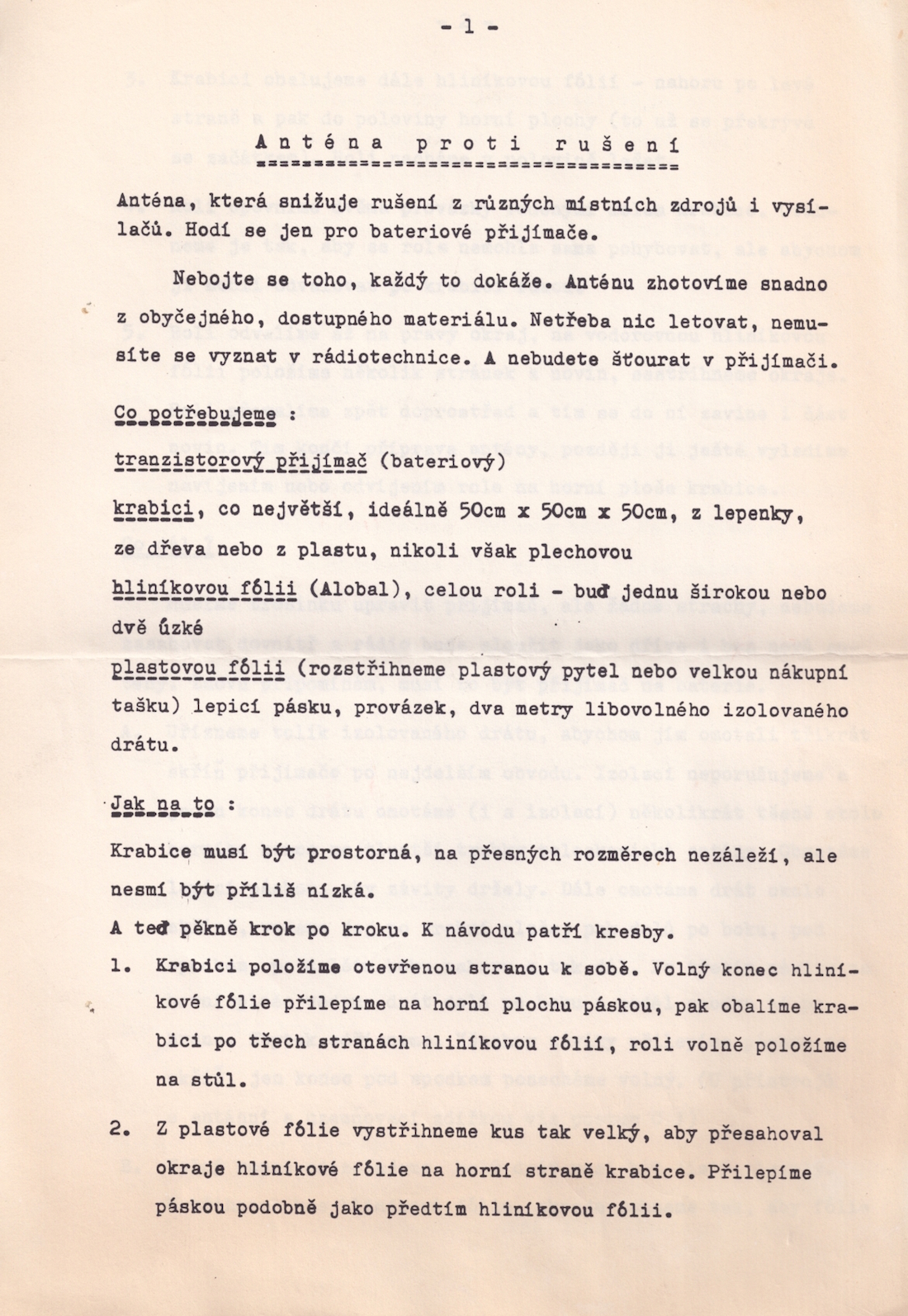 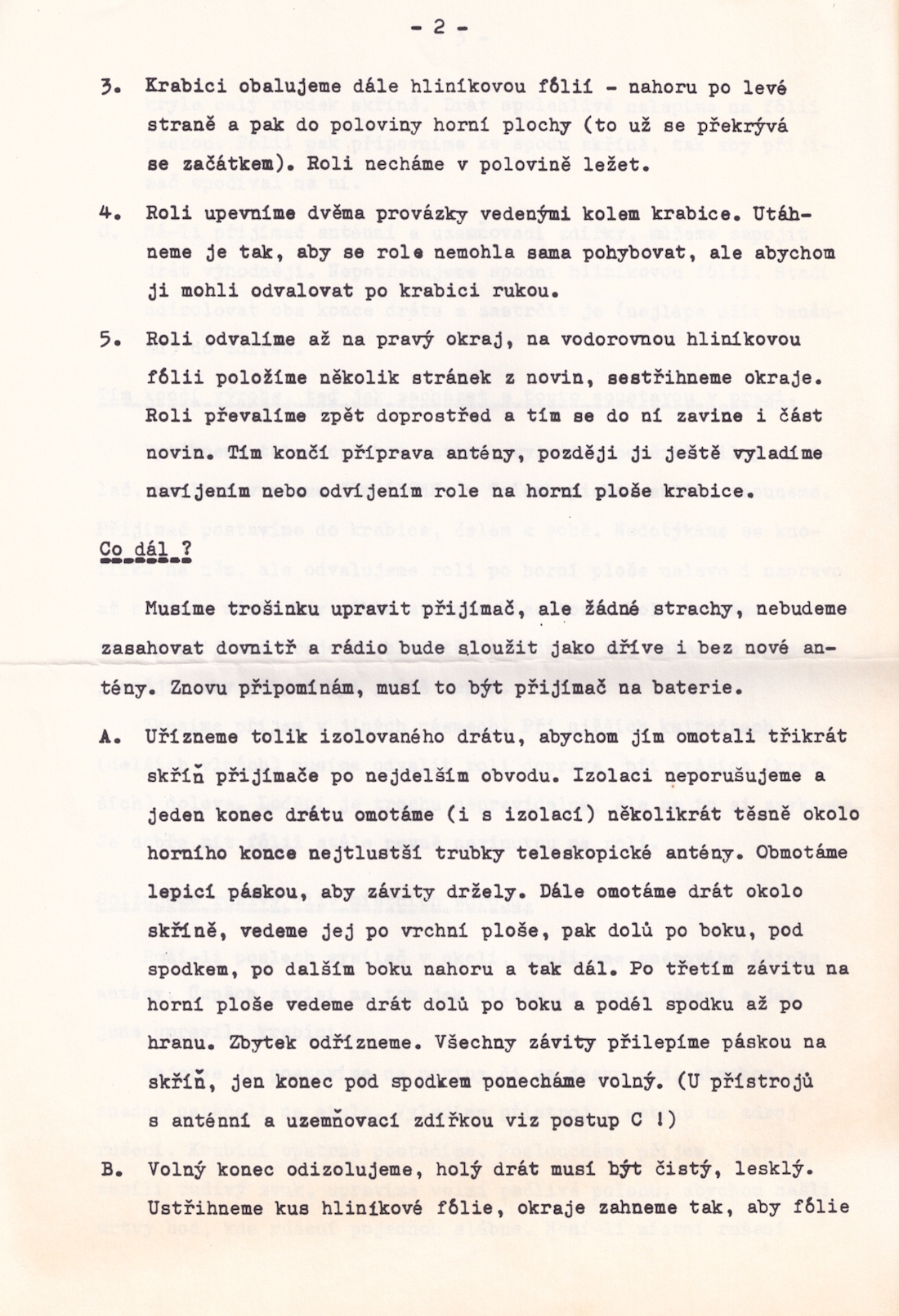 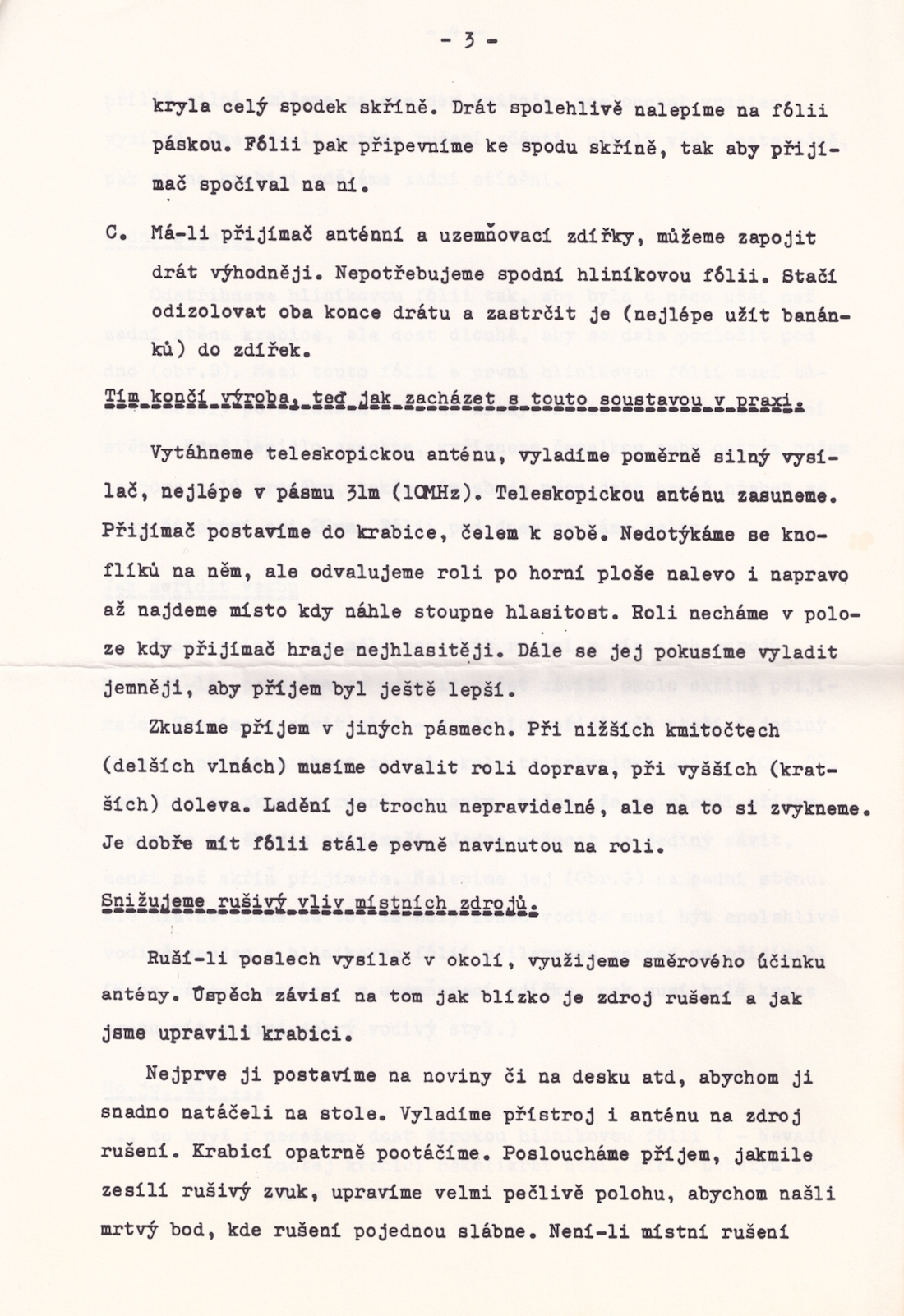 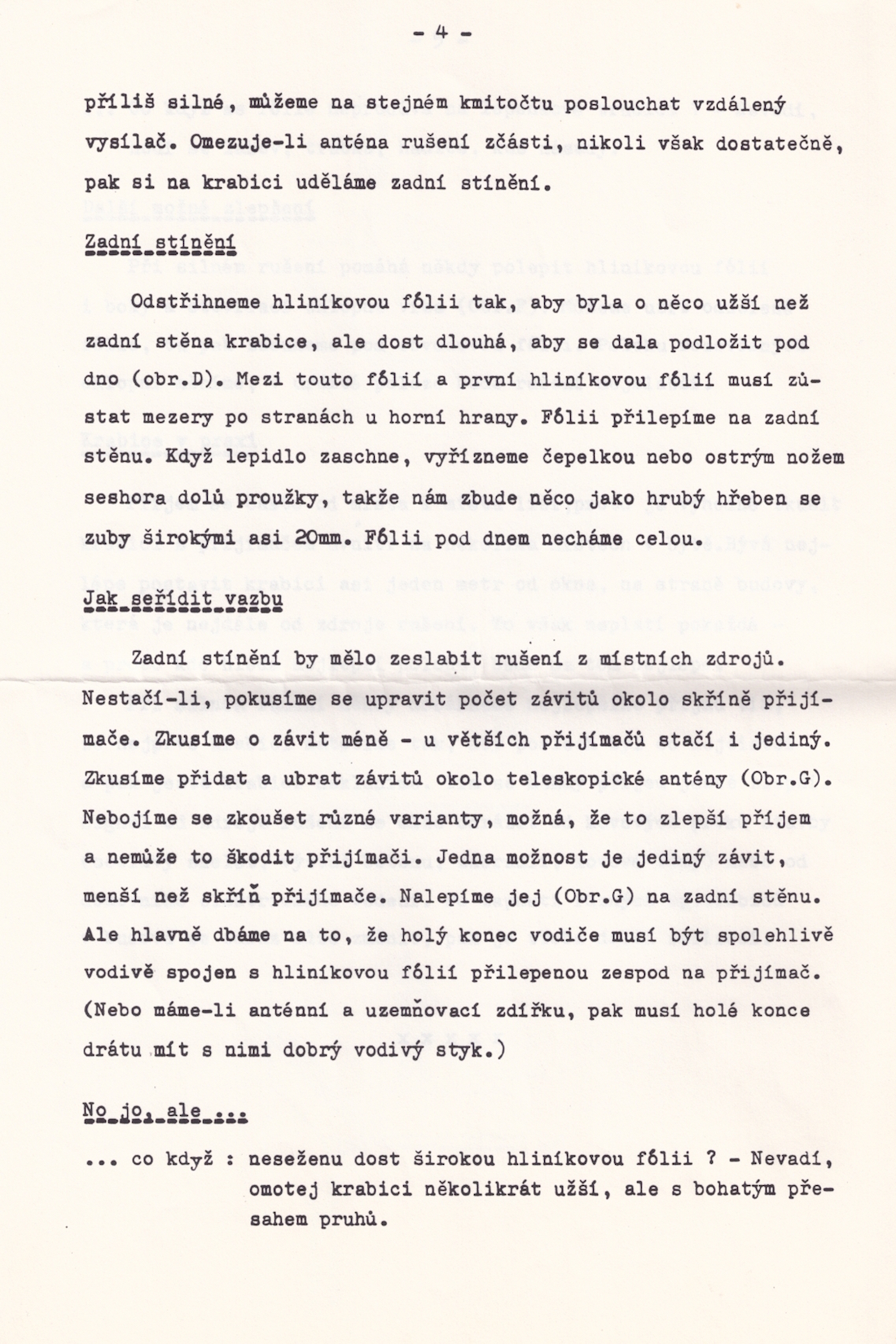 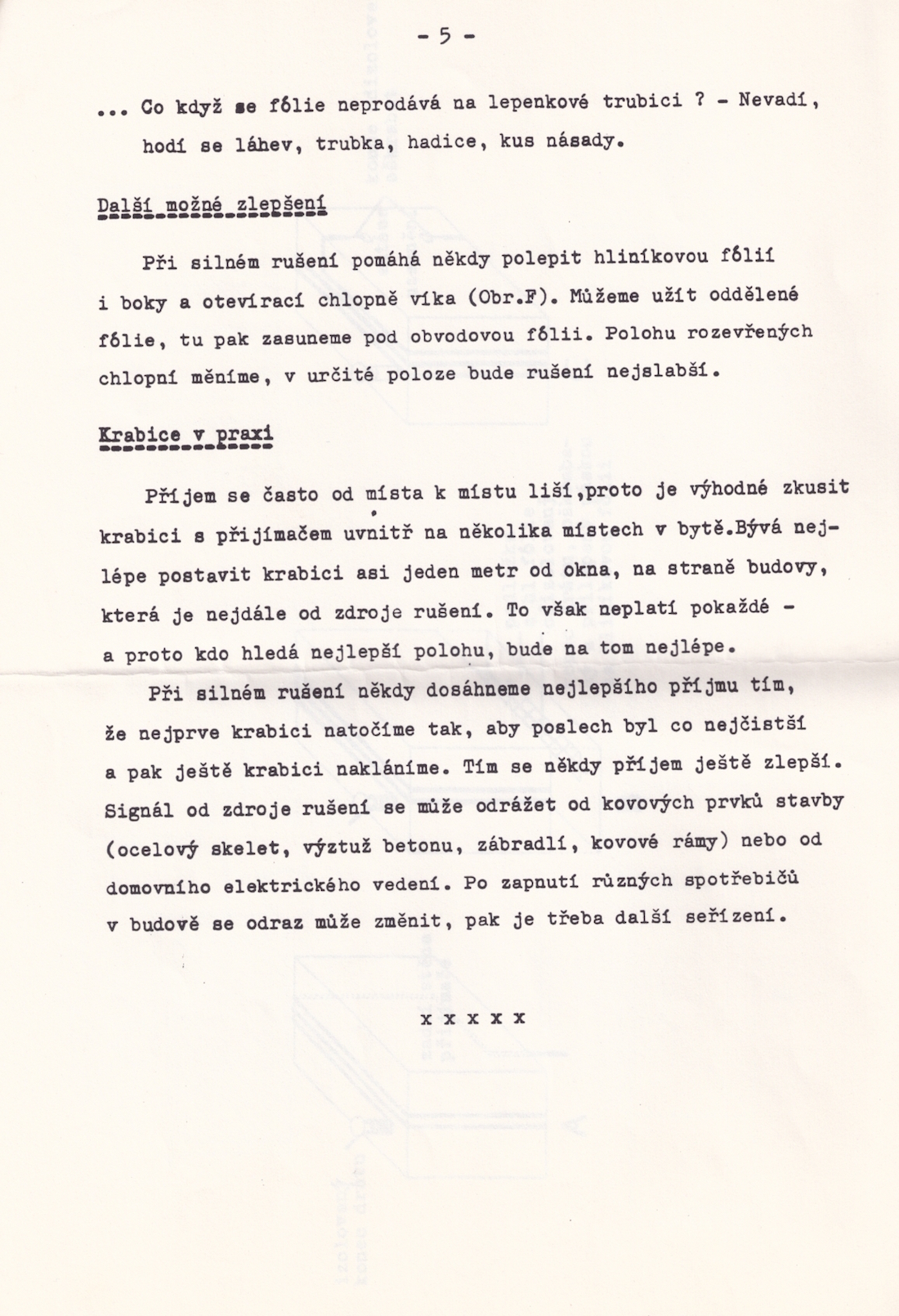 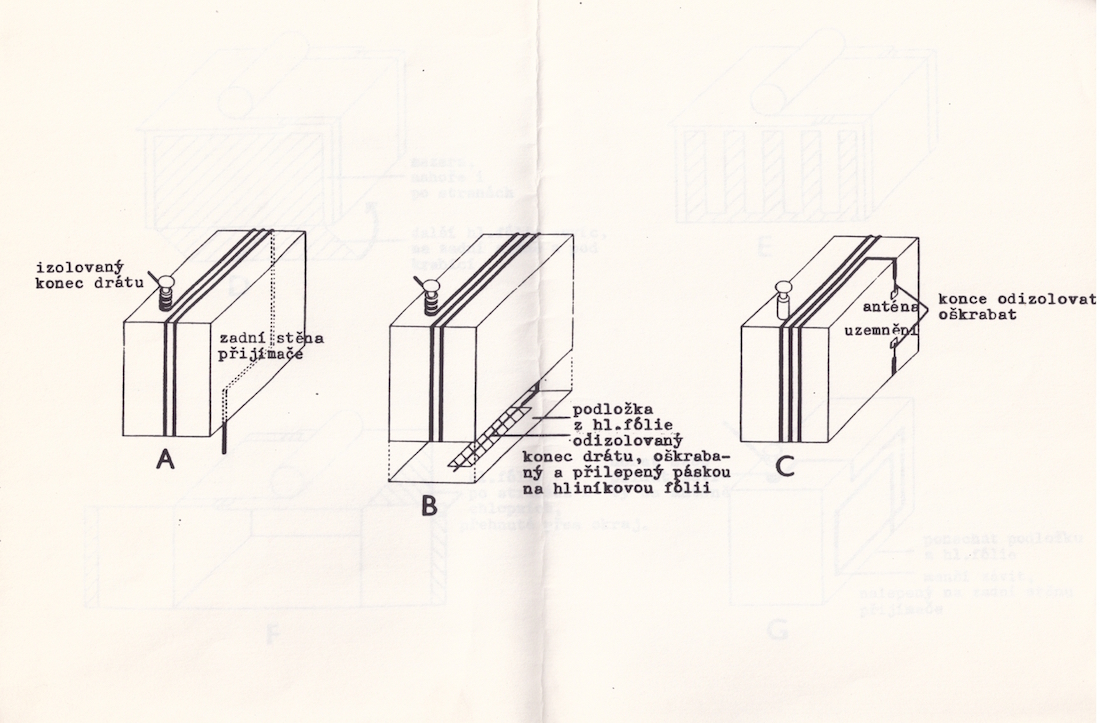 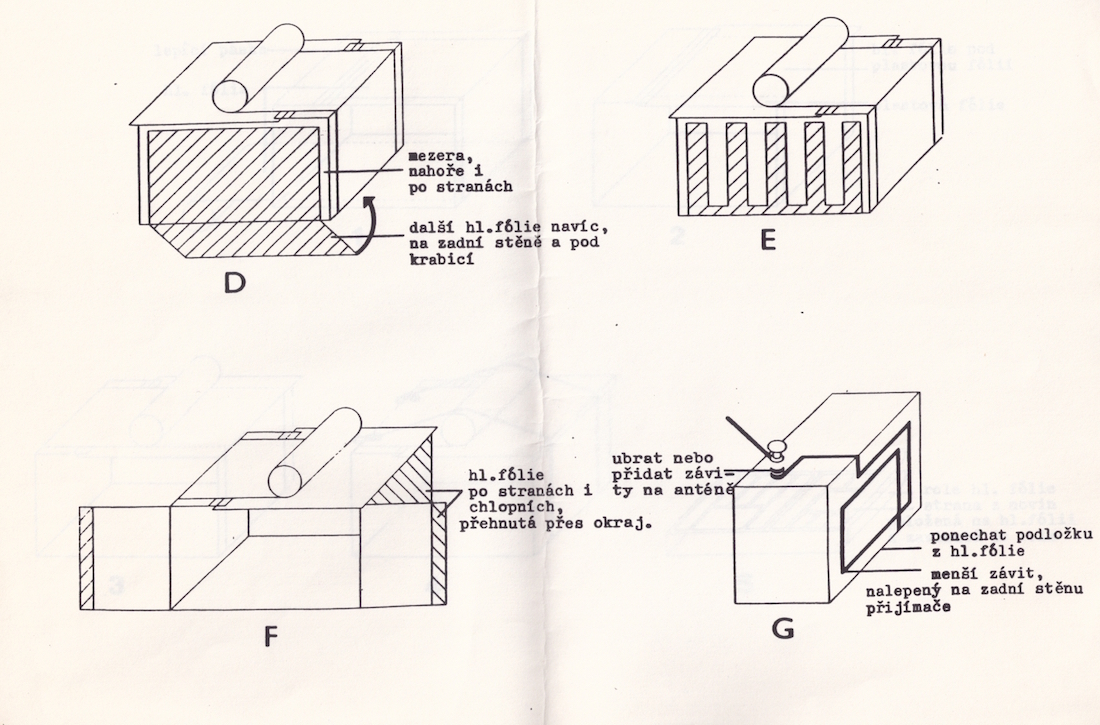