On 4 November 1987, a proposal for an active measure, code named "KOT", was submitted to → Section 36 (active and influence measures) of Directorate I of the Federal Ministry of Interior (FMV) - Czechoslovak intelligence by Capt. Mgr. Jiří "Sabina" Pyšný (Id No. 186843), senior officer of the regional section of SNB (National Security Corps) Directorate Hradec Králové (territorial intelligence unit in the Czechoslovak Socialist Republic).

The aim of the active measure was to contribute to compromising the forms and methods of subversive activity of the US special services, specifically the Central Intelligence Service (CIA), in which, according to the findings of Communist intelligence, the state apparatus of Austria was being misused for the benefit of the USA. Moreover, this active measure was intended to deepen the Austrian public's criticism of the police in Austria and create the impression that the Austrian police were covering up the subversive activity of the CIA. [1]

The planned action envisaged using intel about the travel plans of Austrian national Peter Kottik (b. 1942 in Vienna). Kottik was a widower employed in computer science at the Vienna University of Technology. Kottik visited relatives in Czechoslovakia from his late wife Eva's side, the Horák family.
He visited Czechoslovakia very often, on average every two months and always in the company of his Austrian partner Christy Zuberbuhler. His children, Peter and Eva, spent their holidays with their grandmother in Czechoslovakia every year. Kottik always went to Czechoslovakia for a short time, usually only for the weekend. The intelligence service knew that he did not register his stays in Czechoslovakia. Through the agency network, Czechoslovak intelligence knew that the Austrian military intelligence service HNaA (Heeresnachrichtenamt) was developing and recruiting collaborating officers and non-commissioned officers (which was Kottik's case), who had relatives in socialist countries, including the Czechoslovak Socialist Republic (CSSR). According to Czechoslovak intelligence, Kottik reportedly completed an HNaA intelligence course and was to be used against the CSSR.

In the course of the active measure, two fake letters were sent to addressees in Austria in order to create the impression that the Austrian police were covering up the subversive activity of the American CIA.[2]

An expert translation of the counterfeit letter was provided by → the Centre. In the first phase, a fake anonymous letter was sent to the Vienna police headquarters from within Austria (to give the impression that the writer was a personal acquaintance of Peter Kottik) claiming that Kottik had allegedly boasted several times of being an Austrian military secret service collaborator, that he had US dollars, and that he performed various tasks for the secret service, etc. In addition, he had also claimed that he worked directly for the CIA. It was claimed Kottik specifically gathered information about Austrian citizens of Jewish origin, which the Americans were interested in. He allegedly communicated the information he received directly to CIA agents with whom he was in regular contact. The anonymous author of the letter pointed out that without the knowledge of the Austrian authorities, Kottik was supplying information to the Americans, and his treasonous activity against his homeland and its inhabitants should be stopped. The writer justified not signing the letter, with the claim that he was afraid of revenge by Kottik and his friends. He ends the letter by signing off with the word "Friend". [3] 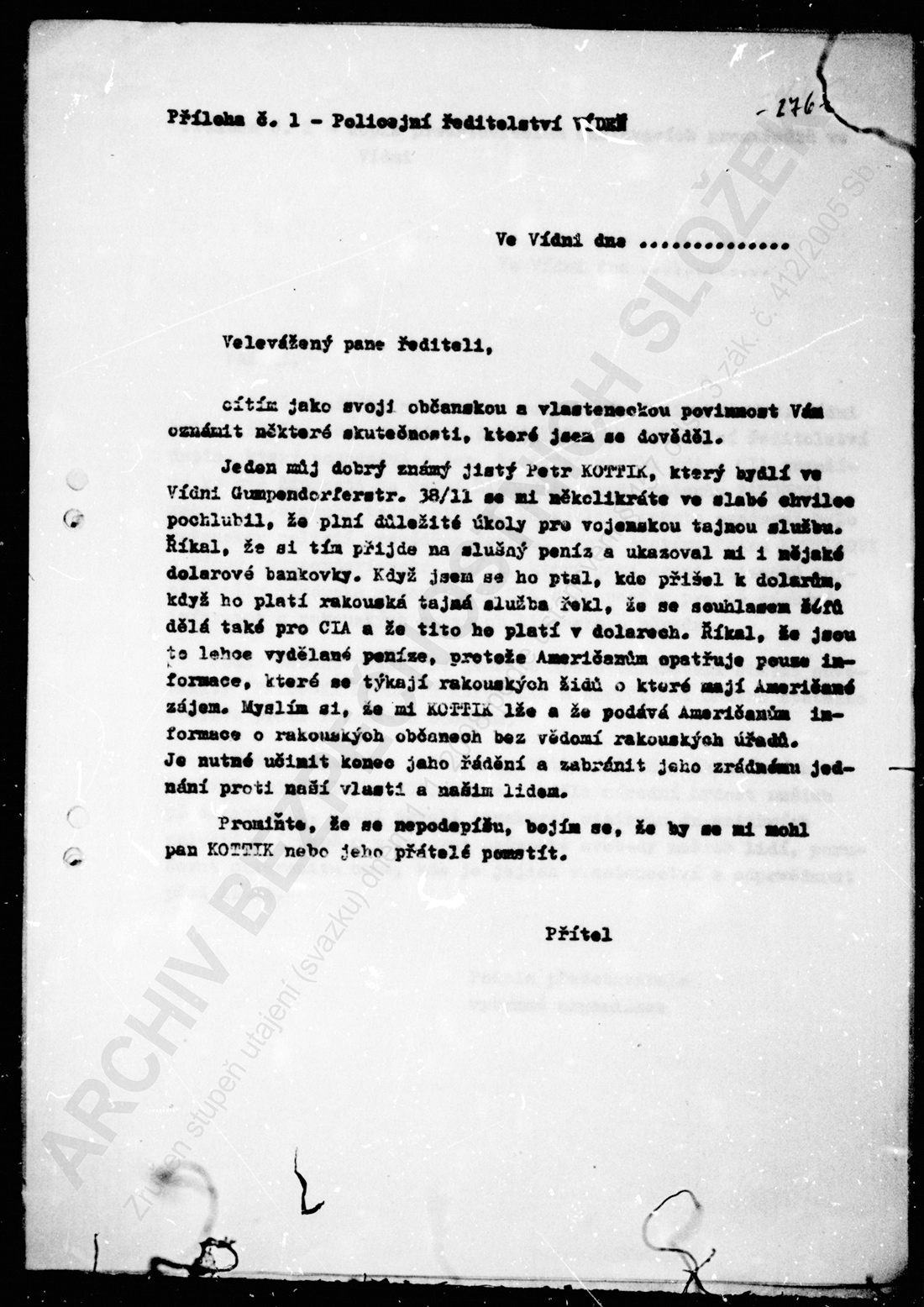 In the second phase, fake letters were sent from Austria in the name of the "Gesellschaft für Direkte Demokratie" (Society for Direct Democracy) and similar organizations to representatives of the Austrian media and Jewish organizations, bearing the signature of the representative of each organization. They claimed to have been informed by trusted sources from within the police that police headquarters was investigating the case of Peter Kottik, who was an agent of the Austrian military intelligence service, and also worked for the CIA. He was allegedly obtaining information on Jewish citizens for money. The letters claimed Austrian military intelligence was being misused against Austrian citizens of Jewish origin. This was pointed to as a gross abuse of the Austrian state apparatus and a violation of state sovereignty. The sender asked for the publication of the case and a public response to the scandalous practices of the US secret service, appealing to the national pride of the Austrian officials who were allowing foreigners to intervene in Austria's internal affairs and violate Austrian citizens' civil rights.

The active measure was implemented by the residentura of Czechoslovak intelligence in Vienna. The letters, of course, had to be in perfect German (even including some elements of local dialect) and could not be in any way traceable to Czechoslovakia. [4] 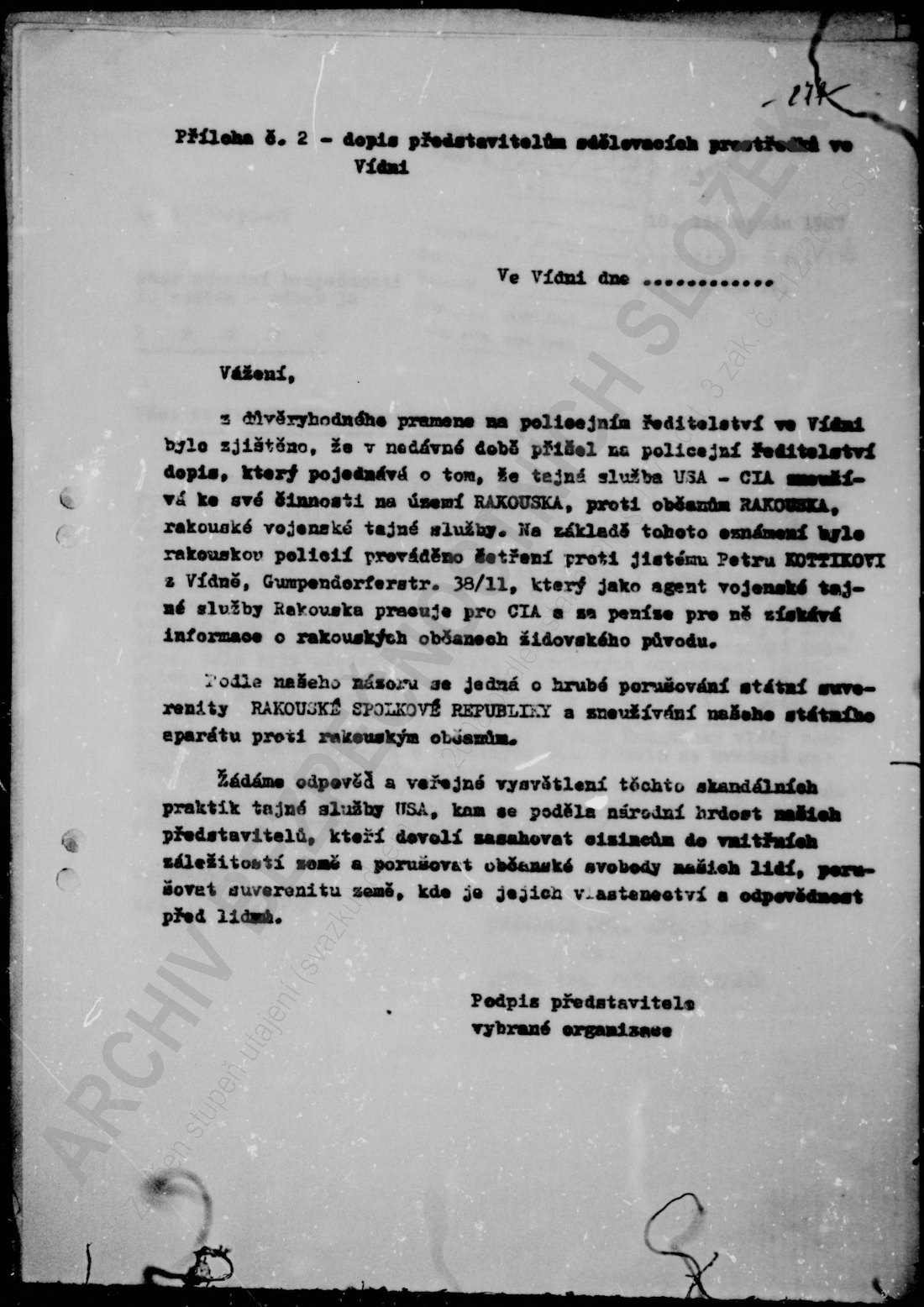