Active measure AIDS - preparation of Czechoslovak Intelligence operation against the USA, aimed at turning the Greek public against US military bases by spreading false reports that these bases are the primary source for the spread of the disease (1985)

On 9 December 1983, Czechoslovak intelligence (→ Directorate 1 of the FMV (Federal Ministry of the Interior)) opened an operational file with registration number 90071, focusing on Greece, to which it gradually added active and influence measures implemented by the residentura of Directorate 1 in Athens. It also contained very complex and illustrative proposals and examples of the contents and forms of active measures. One of these proposals, codenamed "AIDS", was based on disinformation campaigns already carried out by the KGB​. 1

On 10 December 1985 a member of → Section 42 (western Europe and NATO section) of Czechoslovak intelligence proposed an idea for an active measure for → Section 36 (active and influence measures section). The author was first lieutenant Jan "Bezruč" Malásek, senior officer of Section 42. The codename for the operation was "AIDS". The objects of interest were US military bases in Greece. The aim of the active measure was to deepen the resistance of the Greek population to the existence of US military bases in Greece and the presence of US soldiers, with an emphasis on places where the main US bases were located (Athens, Heraklion, Souda Bay in Crete, Nea Makri and Preveza). As a form of background material, Malásek suggested information from the residentura of Czechoslovak intelligence in Nicosia, based on findings that US Secretary of Defense Caspar Weinberger had issued instructions for medical examinations among soldiers at US bases abroad to check for AIDS.​

Preparation for the operation comprised the drafting of written background material, which came from a supposed secret report. It speculated that incidences of this disease had been and were being detected in the US from where it was spreading to Western Europe and other parts of the world. In addition to acknowledging the existence of cases of AIDS within the US military, the orders to conduct medical examinations were also to confirm the existence of drug addiction among American soldiers, as the incidence of the disease was higher among drug addicts. US bases were to be alluded to as hotbeds for the spread of this incurable disease in Greece. Research into the treatment of the disease had so far progressed the furthest in the US. The active measure sought to introduce the hypothesis that if a cure for AIDS were discovered, production would be taken over by US corporations that would sell it dearly and Greece would be forced to make huge financial outlays to the country that had actually caused the disease and its spread in the first place. 2 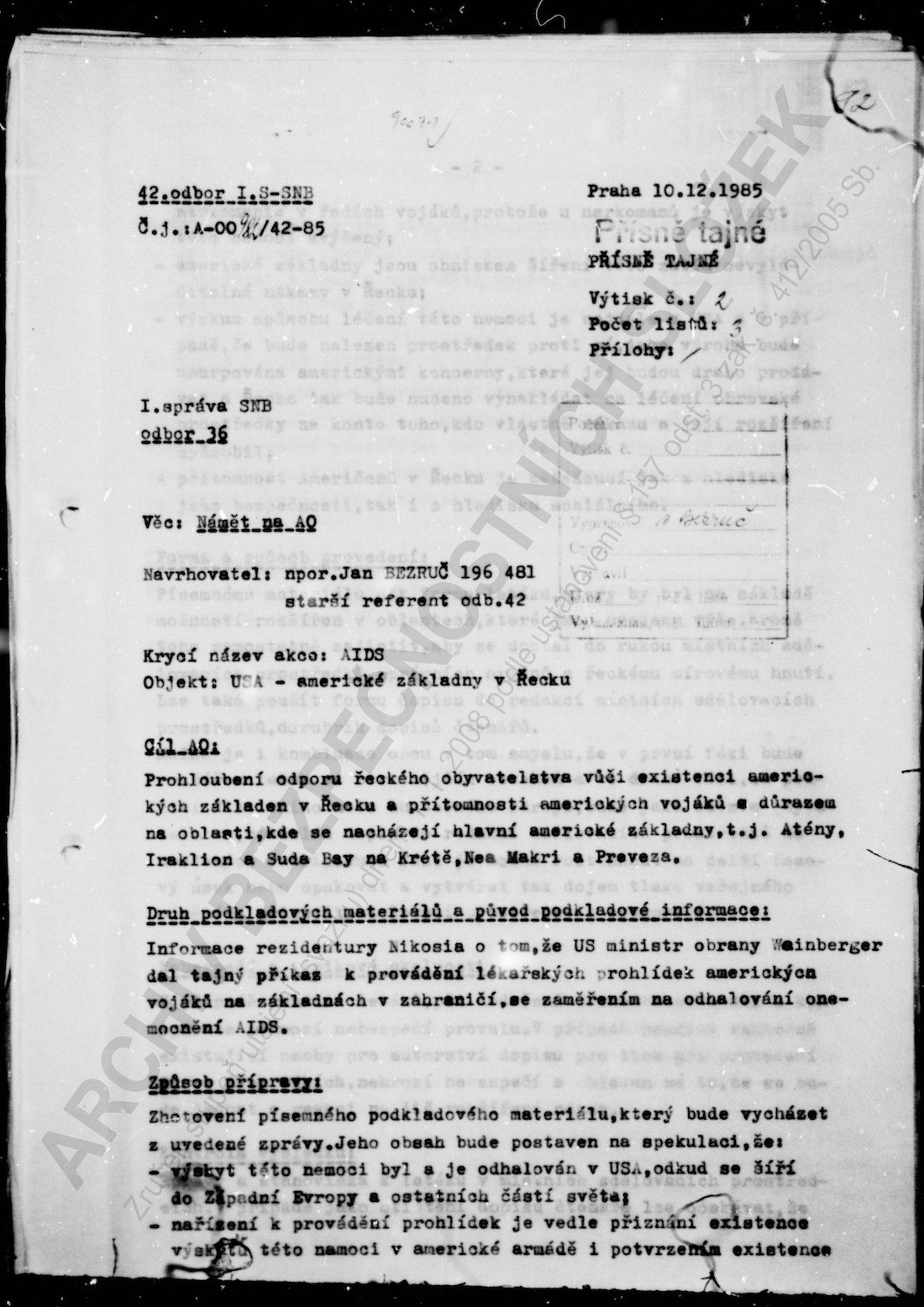 The intended result was to convince both the general public and the expert community that the presence of the Americans in Greece was undesirable from both a security and social perspective.

The form and manner of implementation presumed that written materials in the form of leaflets would be disseminated in the above areas. In addition, it was to be separately ensured that leaflets made their way into the hands of the local media, administration and the Greek peace movement. Another option was to use the form of a letter to the editors of the local media in the "Letters from Readers" column. It was also considered possible to combine both in that during the first phase a leaflet in summarised form would be distributed and in the second phase by using a real or fictitious source, as a type of public response, letters would be sent to all editors for their above-mentioned column. This phase could be drawn out over a long period of time or repeated, creating the impression of public opinion pressure and forcing the media to respond.3

By using leaflets and complying with the principles of conspiracy, the risk (danger of discovery) for Czechoslovak intelligence should be minimal. The use of an actual person to author the letters for printing, during the implementation of both phases, should not pose a danger - it would only be a reaction to an already widespread view.

Assessing the outcome of the whole operation was to be through analysing reports and opinions on the leaflet in the local media. In the case of publication of a reader's letter, it was expected that editors would publish their own views, or that they might publish other responses from the public.

Using appropriate agency sources, i.e. collaborators, it was also possible to monitor responses to the use of the report as an anti-American argument within the peace movement.

As for consultation and cooperation within the Czechoslovak intelligence service with regard to the need to draft the text in Greek, it was planned to, if need be, use the resources and capabilities of Section 36 (active and influence measures section) of Czechoslovak intelligence. Cooperation with the residentura in Athens and Nicosia during the preparation of the original paper material was also planned.

The financial costs were only the cost of paper, postage and possible operating expenses related to implementation.

In the further development and implementation of the "AIDS" operation, it was assessed possible to initiate a call upon the US by Greek doctors or other social organizations and clubs, through a contact with the codename "Gonone". It would include a request to earmark part of the military spending budget for research into an effective treatment for AIDS. In addition, as part of the initial acquisition of contacts and lists of organisations, increased attention should be paid to individuals and groups, including prominent individuals inclined towards homosexuality.4