On 14 August 1989, a proposal for an active measure with the code name "NÁDOR" was drawn up within operation "ČAJ". The proposal was submitted by a member of Directorate I of the FMV Capt. Zdeněk "Meduna" Záliš from ⟶ Section 47 (Middle and Far East) to ⟶ Section 36 (Active Measures). After incorporating detailed guidelines for carrying out the operation, the proposal for the active measure was finally approved only on 23 October 1989 by the chief intelligence officer ⟶ Lt.Col. Vilém "Kainar" Václavek.

The aim of the active measure was to deepen the antipathy between developed capitalist countries and China, in particular in this case between the Federal Republic of Germany and China. According to the hegemony of the Soviet KGB, which often "tasked" the satellite intelligence services of the Eastern Bloc, Communist China at that time was an adversary of the socialist countries of Central and Eastern Europe.

Another aim that was pursued was the discreditation of Western special services in connection with events in China at that time (events in Beijing’s Tiananmen Square had increased tensions between China and the West). Despite careful preparation of the whole event, the Czechoslovak intelligence service did not implement this active measure in the end "especially in light of the state of emergency in Beijing". However, the thorough preparation, the drafting of fake mail, the importance and the methods prepared to achieve the goal, provide important evidence of the readiness to use fierce psychological warfare against any adversary. The decision not to implement the aforementioned active measure was certainly influenced by internal political developments in Czechoslovakia and information about the brutality of suppression of student demonstrations in Beijing and subsequent repression in China.[1] 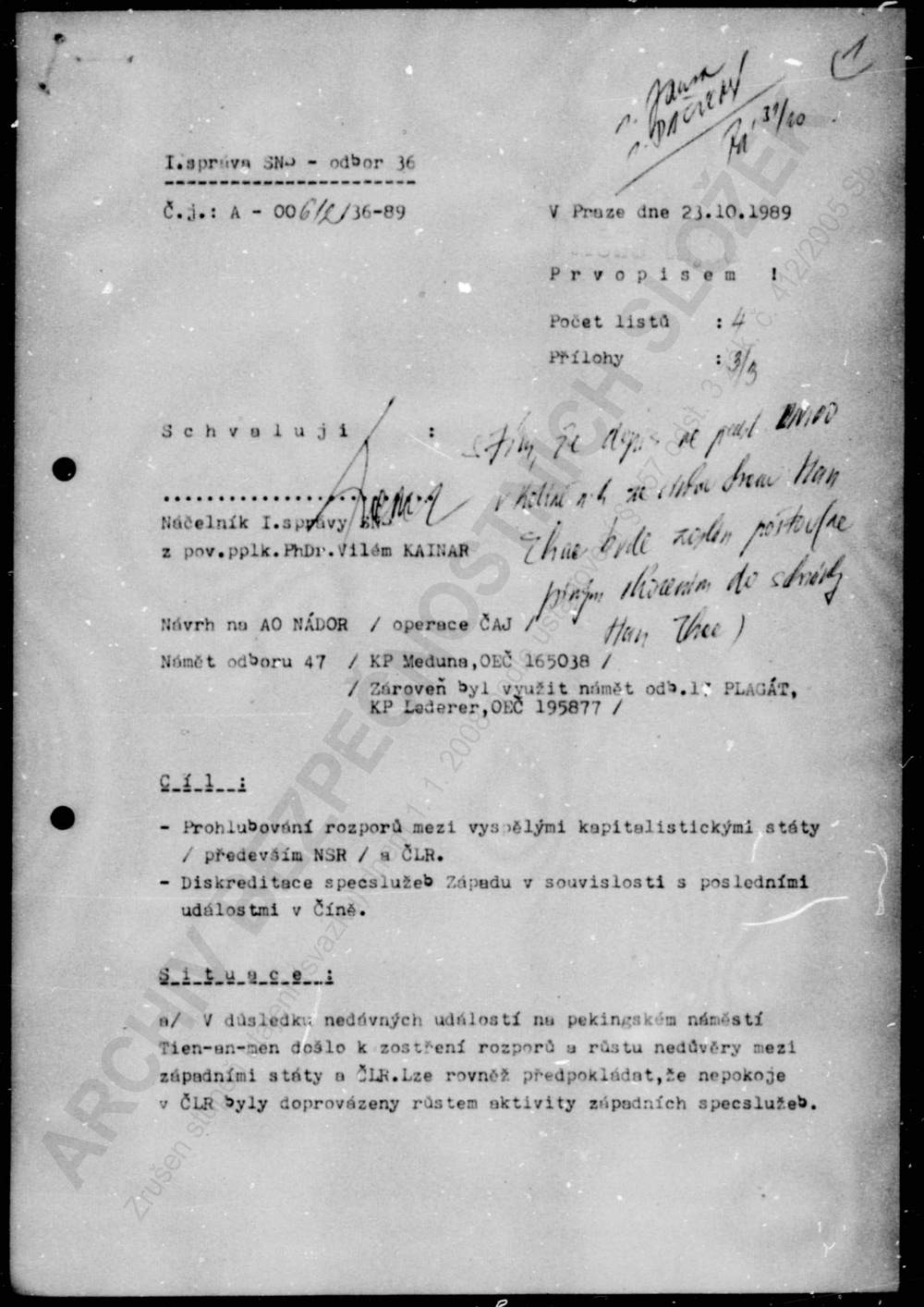 The StB assumed that the riots in China were accompanied by an increase in Western intelligence activity. The intelligence service obtained information through an agent that German citizen Wolfgang Jagl (b. 1949), died suddenly under unexplained circumstances after a visit to China. Mr. Jagl was a sales representative of C. Illies and Co. and Irisu Shokai K. K. based in Tokyo. He had previously worked at a branch of a German commercial bank and the Industrial Chamber in Tokyo, as well as Beijing, Cologne and Vienna. After returning from a business trip to Beijing in May 1989, he began complaining about severe headaches in Tokyo and was operated on for suspected cancer. However, the findings were negative. Finally, his special transport to Germany was arranged for specialist examination. But he died en route to his homeland.

The StB decided to use this tragic death for its own active measure "NÁDOR" [tumour]. They carried out preparations in the way that ⟶ Czechoslovak residenturas in Tokyo and Bonn, were to “play” a cynical game in three consecutive phases. In the first phase, the residentura in Tokyo was to send a fake letter of a fictional unspecified worker of Chinese counterintelligence, who in the past had studied in Germany and had apositive relationship with the Germans. In that fake letter, from which it was supposed to be clear that the writer was from a Chinese Embassy in Tokyo (but actually a Chinese intelligence officer), it was to be implied that there was a direct link between the activity of the Chinese intelligence services and the death of the German citizen Jagl. Fake letters were ready to be sent to Irisu Shokai K. K. in Tokyo, to the West Germany Embassy in Tokyo and the Japanese correspondents of Der Spiegel and Die Welt.

Approximately a week after the first phase, the second phase was to follow, in which the Tokyo residentura was supposed to deliver a fake anonymous conspiratorial letter to a Chinese military attaché in Tokyo, Gao Saoxing, identifying a Chinese national working in Japan who is a traitor and collaborates with the West and "stirs up passions and riots" among the Chinese population. The aim was also to induce the emigration of Chinese intelligence to the West. The purpose of this phase was, among other things, to bring the communicated disinformation and the "fact" that they had traitors in their own ranks to the attention of the Chinese side. The text of the fake letter was translated into English by members of the relevant part of the Ministry of the Interior.

The third - supporting part of the operation was to be implemented by the residentura of Czechoslovak intelligence in Bonn, Germany. It was supposed to drop an anonymous fake letter an - "alert from a German whistle-blower" - directly into the mailbox of Mr. Han Zha, the Chinese representative of UNIDO (United Nations Industrial Development Organization) in Cologne, who was identified as a possible member of Chinese intelligence. The fake letter contained a warning of possible provocations and actions organized by the CIA in China in connection with the death of Wolfgang Jagl and the general developments in China following the events in Beijing's Tiananmen Square. The intelligence service was primarily focused on driving a wedge between China and West Germany.[2]

Text of the fake letter for realization of the first part of AM Nádor:

I was very saddened to hear of Mr. Jagl's sudden death. He was a very sophisticated gentleman, whom I personally cherished for his fair approach to the Chinese people and for his efforts to help us. Against my convictions, I am forced to work for an institution that is directly responsible for his death and for the death of many other people who wanted nothing more than to lift up the Chinese people and open up their path to democracy. Like many others, I believed that our reforms would improve our people's lives, that our party would not stand against our interests as it did several times in history when led by Mao Tse-Tung.

Today I am bitterly disappointed and deeply ashamed that I was misused. My current employment is the price I pay for the beautiful moments I got to experience during my studies in your country. I do not want to and cannot remain silent forever. But the right opportunity has only arisen now for me to draw your attention to this shameful act, which was not unique and which other successors are not protected from because in Beijing everyone is under constant, strict control. I hope my warning can at least partially atone for my share of the blame for Mr. Jagl's death.

With respect and apologies

Text of the fake letter for the realization of the second part of AM Nádor:

I have never had the honour of meeting you in person, nevertheless you seem to be the most suitable person with whom I can share my warning. I would like to inform you that our office has recently received information provided by an employee of your Embassy which can be and probably will be used against your country. More specifically, the topic is the death of a citizen of the GFR employed by the company C. ILLIES and Co., Ltd. headquartered in Tokyo, who was sent to Beijing with a special task in May of 1989.

I cannot come to terms with the fact that the death of this drug addict and debased delinquent will be attributed to the "activity" of your counter-intelligence organs. Jagl is a pawn in a global and well-coordinated activity of allied nations directed against China and executed both from your country as well as from other countries. At regular coordination meetings, a unified approach to specific areas is determined. In general, the point is understandably the destabilisation of your development. One of the main specific goals lately is to encourage your young students and prospective intelligentsia to emigrate. Most of them will be forced to settle down in Asia, especially in Japan, Korea, Thailand and Taiwan and only the really highly valuable ones will get to the USA.

Do not take my information in any other way than as a friendly warning of a man, who, after many years, has come to believe that these behind-the-scenes games have never done any good, and who is starting to be fed up with this crazy world. I admire your country perhaps precisely because it has always tried to resolve its problems on its own, albeit sometimes in a harsher, unique way. And this is the way it should probably be everywhere in this world.

Text of the fake letter for the realization of the third part of AM Nádor:

You are well known to me as a person who can be informed at least in this way about the preparation of a new campaign against your country. The action is handled and coordinated by the American CIA, which, after you made the conditions for its activities in Beijing more complicated, wants to use the less obtrusive work of allies, especially BND agents, to further destabilize the overall situation in your country.

The immediate pretext is to use the case of Wolfgang Jagl, who was in Beijing during the events, and who died shortly afterwards under mysterious circumstances. I knew him well, and I do not believe that your side is responsible for his death. I personally disagree with the misuse of his name, and I am choosing this path in the hope that I can still prevent it. I do not know the full scope of the planned events, but it will include, among other things, greater involvement of organisations such as Amnesty International, IGFM and others that specialise in human rights.

It will also use the position of Tibet, which, after the staging of the Nobel Peace Prize for the Dalai Lama, is a willing field of activity. Nor will Teng be spared, whose death is, contrary to your claims of his good health, expected in the next few months. If I get the chance, I will get in touch again. I assume that additional information would meet with appropriate financial compensation from your side. I will let you know the method in which the money should be handed over in time, including the amount requested 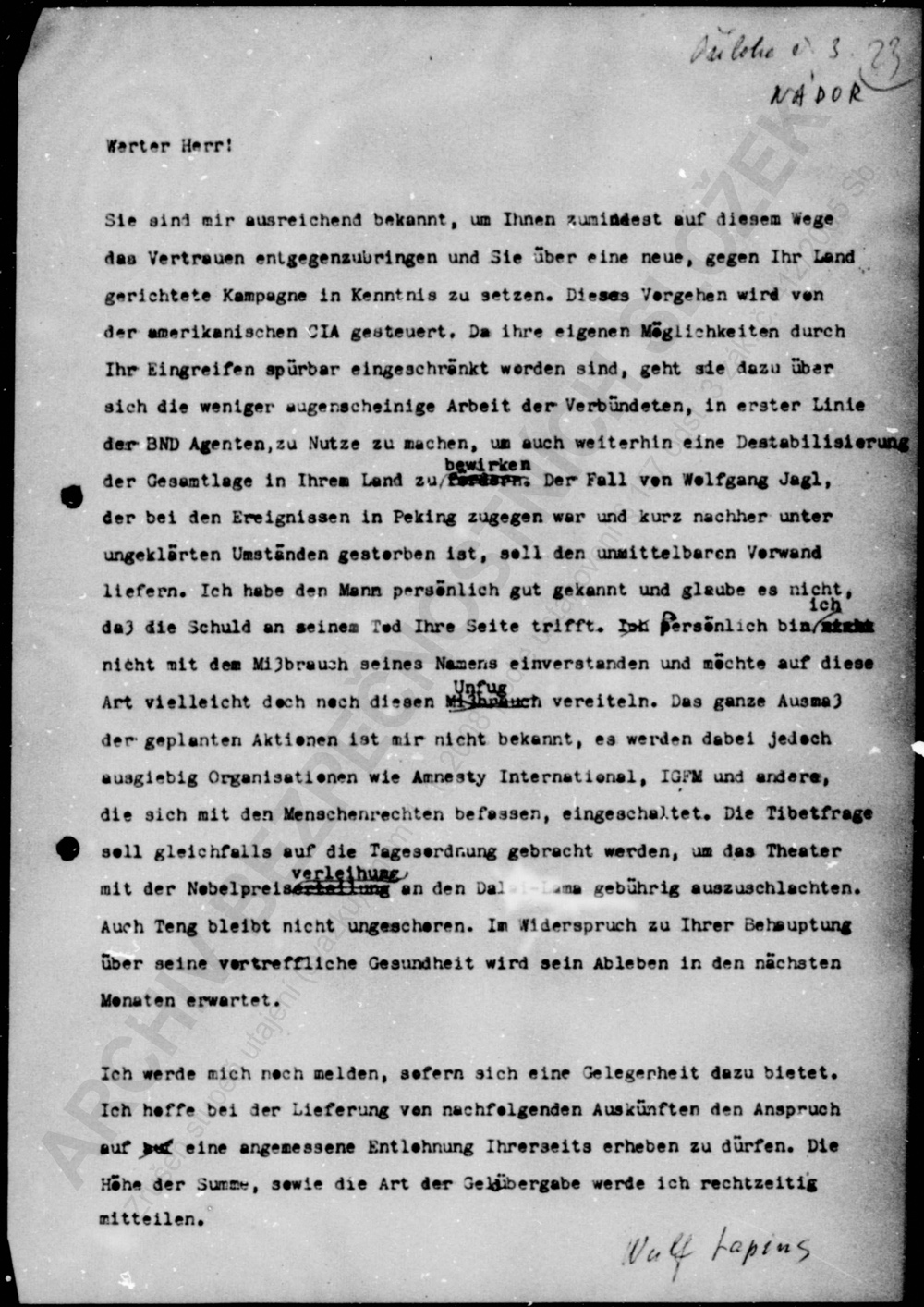