On 21 November 1986, a proposal for an active measure code named "ŠTOK 5" was sent to Section 36 Directorate I of the FMV (→ Active Measures Section of the StB) by the regional section of the StB intelligence service in České Budějovice, as part of operation "AKTÉR". The petitioner was senior officer Maj. Stanislav "Albrecht" Eismann. The need for the → active measure (AM) arose from the events of 28 October 1986.

In the morning on this day in České Budějovice a 7kg time bomb exploded in the vicinity of the buildings of the South Bohemian Regional Committee of the Communist Party and South Bohemian Regional National Committee and the Memorial of the South Bohemian Workers' and Revolutionary Movement. The explosion caused extensive physical damage, but no injury or loss of human lives. From the placement of the explosive it was clear that it was a politically motivated attack against the Communist regime.1 In the end though, in January 1987 the proposal was rejected and Section 36 carried out another operation under the code name ŠTOK 5, in cooperation with the KGB (see below).

Active measures implemented by Section 36 Directorate I of the FMV within operation AKTÉR up until 1988 involved the discrediting of West German politics (after its termination, this matter was incorporated into operation LONG). Part IV Evaluation of Section 36's cooperation with Soviet Friends in 1987 of the document entitled Overview of Interaction between Directorate I of the SNB and the First Chief Directorate of the USSR KGB in 1987 (Annex no. 1 ref. no. A-0011 / 15-88, 16 February 1988, Prague), states that within operation AKTÉR in 1987 the following operations were carried out in cooperation with the Soviet KGB:

The StB feared that the explosion could create on opportunity to "misuse" this event against the CSSR in international fora on terrorism and to discredit the Communist Party as the leading force in the country. Basically, it demonstrated the ability of forces opposed to the regime to carry out an armed attack against the Communist Party and, in addition, helped spread rumours and the rebellious views of the so-called anti-socialist forces through the population. The regime was also afraid it might set a behavioural precedent, which could then extend to other parts of Czechoslovakia. 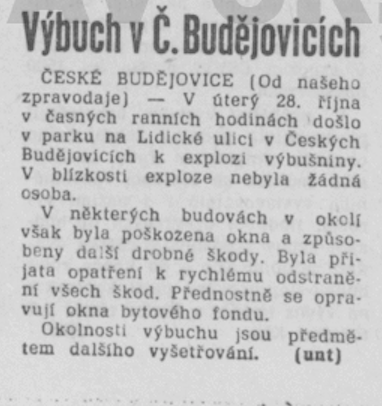 Rudé Právo daily from 29 October 1986 published a brief report on the incident.

The StB wanted to demonstrate by active measure "ŠTOK 5" that the incident – the explosion – was not carried out by internal anti-regime forces, but was prepared and carried out from abroad with the following objectives: to discredit the CSSR in the sense that it is a country supporting international terrorism; to prove the existence of internal resistance forces dissatisfied with the regime and to discredit the Communist Party itself as the leading force against which armed resistance is starting.

The active measure was to take the form of a prepared statement of an anonymous informant, as was done in several previous active measures. A foreign neo-Nazi organization was to be identified as the perpetrator of the explosion. It was also to be linked to the alleged terrorist activity of the CIA. Everything was ready. The statement itself was drafted by Section 36 Directorate I of the FMV (Active Measures Section) and a translation and recording onto tape was arranged by collaborator "Beret".

In November 1987, a file was opened on Arndt Hans Dieter of West Germany under the code name BERET, vol. 49390, in the category of ideological collaborators of the Regional Section of Directorate I of the National Security Corps in České Budejovice. He was first registered in the StB's Register of Persons of Interest in 1983.

The first cassette tape supplemented with disinformation materials was to be sent from West Germany, by the residentura in Bonn to Czechoslovak Radio's office in České Budějovice. The second tape with the same content was to be sent to the same address but mailed from North-East Bohemia. Cassette tape no. 1 was intended to confuse the intelligence service in West Germany and to show that it was indeed sent from Germany. The average postage time from West Germany to Czechoslovakia was 4 - 6 days and within the country 2 - 3 days. The time difference between the delivery of the package with cassette no. 1 and the package with cassette no. 2 would allow the adoption of measures to ensure that no other people were aware of the objective of the active measure. Due to the ongoing investigation, the package was to be immediately handed over to the South Bohemian Central Committee of the Communist Party and the Chief of the StB in České Budějovice was to receive the information about the package, too. In this way the operation would be brought under the control of the StB again.2

Moreover, the active measure was to be implemented before the federal elections. Under this active measure, the content of the package was to be made known to the governments of Sweden, West Germany, France and Belgium. A press conference was also prepared to show the “background of provocation” and the fact that if the CSSR were to conceal information (from packages fabricated by the StB) it could be accused of cooperating with international terrorism and concealing information.

It was also to inform about anonymous phone calls (hinting at a foreign connection), which were commonplace abroad. A press conference was to provide information from the foreign press (another result of the work of the StB abroad – the preceding dissemination of disinformation to the Western press) and thus further support this fabricated version. This active measure was to get both the Czechoslovak public to believe the foreign connection, as well as the Western public. At the same time, it was supposed to promote internal conflict between left-leaning parties and their counterparts in the West.

The StB used disinformation from it, which they spread at home and abroad but to a lesser extent. In essence, the concerns of the StB were unfounded though because the perpetrator was never discovered.3 In connection with this decision regarding the proposal from the regional intelligence section of the StB in Ceske Budejovice, the code name "ŠTOK V" was used by Section 36 for another active measure that was actually implemented. 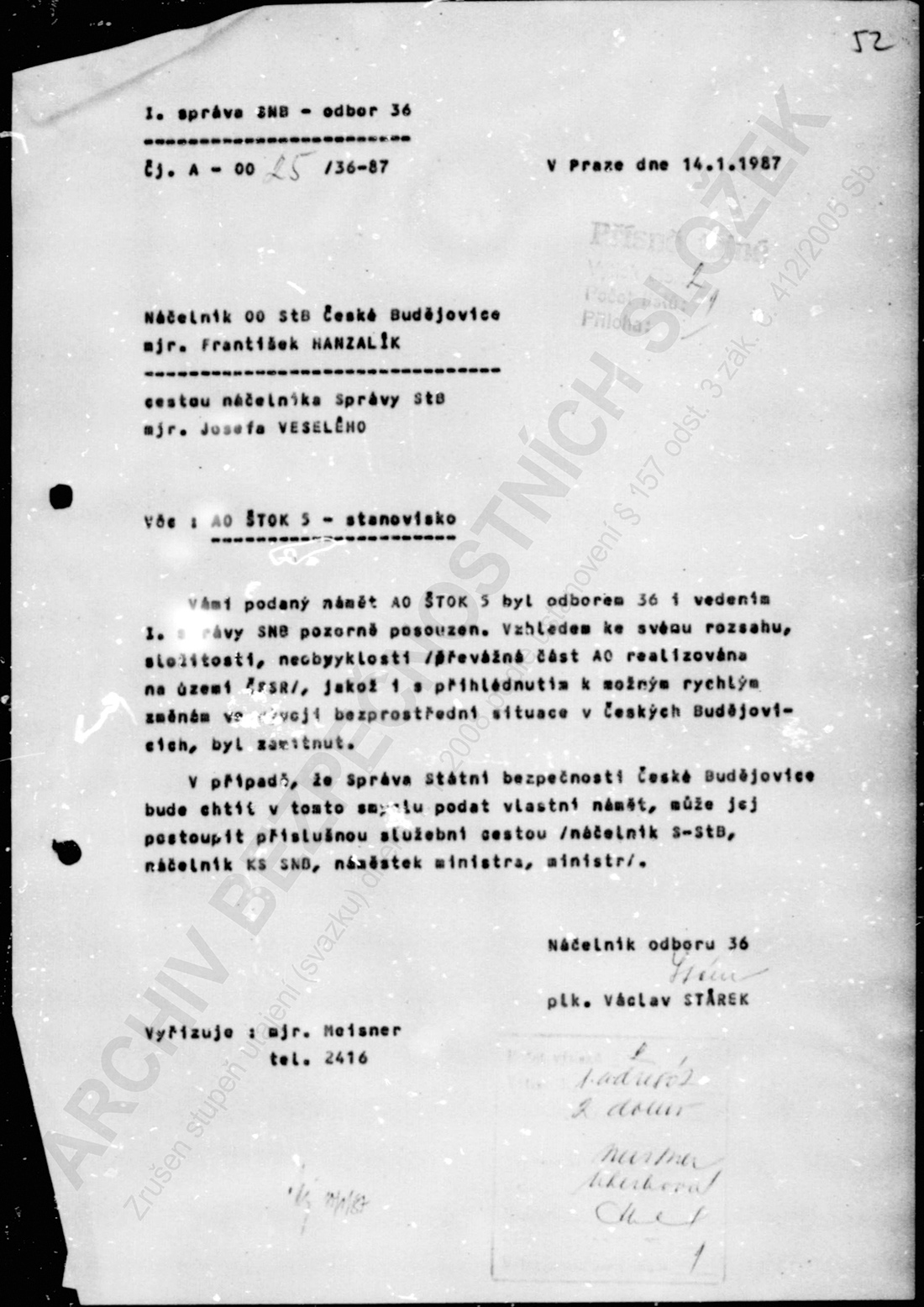 Between 1986 and 1989, four unprecedented bombings took place in Czechoslovakia, aimed at party and political buildings and in which no persons were injured. It was armed resistance to the Communist regime, where the explosion in České Budějovice was the first, followed by an attempt in Pilsen in 1987, where security forces found a 19.456 kg East German industrial explosive Gelamon 30-351 in 58 cartridges packed in black foil. The explosions continued in 1988 in Pelhřimov and in 1989 in Ústí nad Labem. In 1989, before the last explosion, a nationwide management headquarters for operation "Explosion" was set up, led by the deputy chief of the investigative department of the StB. It did not yield any results though. 4