An → active measure, code named "SLAP V", within the broader operation "ÚROK" was proposed on 26 May 1989 by Lt. Col. Zdeněk "Fučík" Fryauf of Section 36 (active and influence measures) of Directorate I of the Federal Ministry of Interior of Czechoslovak Intelligence.

Lieutenant colonel Zdeněk "Fučík" Fryauf (b. 1932)- joined the Ministry of the Interior in August 1953 as an "administration employee" - a professional dancer. He joined the service in 1957 and becomes a senior assistant chief responsible for artistic performances. In the summer of 1964, he moved to Section 1 (Americas). In 1969-1970 he worked at the residentura in Mexico. In October 1970 he was transferred to Section 3 of Directorate A (Afro-Asian Section; renamed Section 47 after the reorganization in 1971). He worked at the Cairo residentura as part of Section 47 from 1970-1976 and 1978-1980. In 1980, he joined the Active and Influence Measures Section (Section 36), where he remained until retiring on 31 December 1989.

The aim of this measure was to spread arguments against the termination of work on the Gabčíkovo-Nagymaros waterworks by the Hungarian side among the Austrian public and in the business-political circles there. Communist intelligence also worked with publicly available information. On 13 May 1989, the Hungarian government had decided to suspend the construction of the Nagymaros waterworks for two months. At the time, the StB was still relying on information that this step would meet with criticism in Austria. This stemmed from concerns that Austrian companies would incur damage by the possible withdrawal of Hungary from the contract for construction of the waterworks. Czechoslovak intelligence noted in the operation proposal that such sentiments and attitudes of the Austrian public needed to be intensified, as they could form the basis of possible influence that Austria might have on the Hungarian government to take a more rational approach to the issue of compliance with the contract for construction and operation of the Gabčíkovo-Nagymaros waterworks.

The active measure was implemented on the initiative of an "implementation channel" → the ideological collaborator (IC) “Fords” - in Austria and Hungary from the beginning of September 1989 until the second half of October 1989. 1

Within the active measure, the original intention envisaged implementation in two forms. This was through the press (through the residentura of Czechoslovak intelligence in Vienna) and the spreading of information by word of mouth in support of the completion of the Hungarian side (through the Regional Department of Czechoslovak intelligence in Bratislava). The original intention was only partially achieved as the Vienna residentura did not complete its task, i.e. there was no media coverage of the case in favour of the Czechoslovak side.

Propositions prepared by StB intelligence were supposed to be publicized, including the following most notable ones: 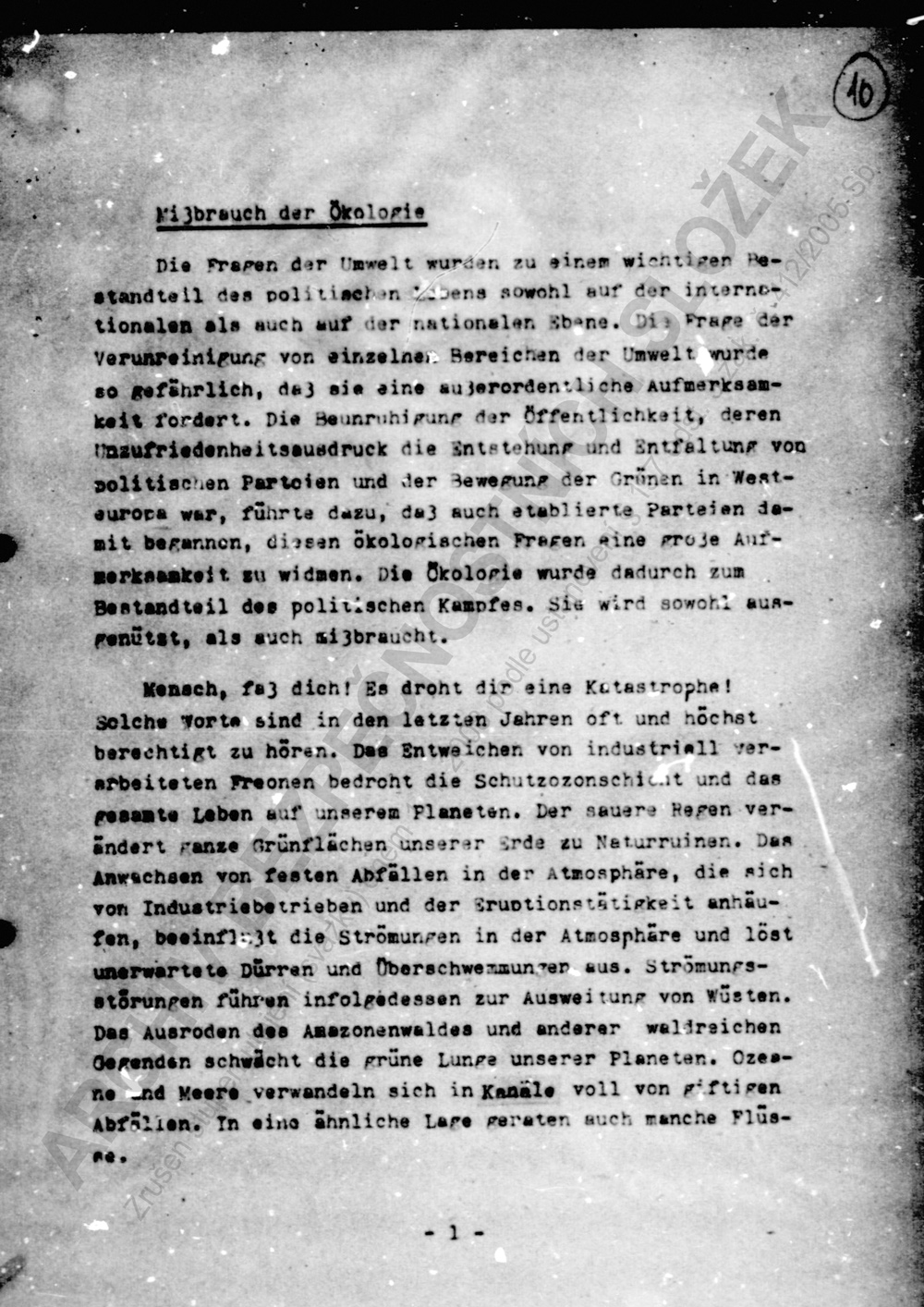 Above all, the background material for the active measure emphasized that environmental issues were being exploited for political ends. This was allegedly evidenced by events in Hungary - the opposition's efforts to question previous development of the landscape. This led to a campaign against the Nagymaros waterworks.
In addition, the background materials recounted the history of planned construction on the Danube in the area, where it was agreed in 1977 to build waterworks. In this context, it was highlighted that the Hungarian side's arguments about a "Stalinist project" were nonsense. The project's benefits for Czechoslovakia, Hungary, Austria and other Danube states were emphasized.

These arguments were drafted by → secret collaborator "Maroš" and the oral dissemination was prepared by Lt-Col. Zdeněk "Fučík" Fryauf from Section 36 of Directorate I of the FMV.

The activities of IC "Fords" where to produce results in Austria and Hungary. IC “Fords” was well established in Austria and disseminated information among his business partners. Significant contacts of IC "Fords" in Austria responded mainly to the issues concerning the elimination of catastrophic floods and to the amount of possible compensation which would be demanded by Czechoslovakia in the case of noncompletion of the waterworks in accordance with the original project. He also used a trip to Hungary in October 1989 to trade fairs in Budapest, where he focused on leading officials of Hungarian foreign trade companies. In Austria and Hungary, among IC "Fords" business contacts there were conflicting views on Hungary's termination of construction of the waterworks. However, this was not enough to achieve the goal of the Czechoslovak side or its "extension", the intelligence service. The ideological collaborator IC "Fords" was not able to achieve anything despite his varying degrees of success in convincing some. The decisive factor was that Austrian businessmen in the end positively assessed the termination of construction of the waterworks on the grounds that the Hungarian side would thus save money that it could then invest in the purchase of Western technologies and goods, which was in their interests. E.g. a representative of the firm Vitrans Josef Almer concluded a greater volume of contracts with the Hungarian side than a year before.

A representative of the Hungarian company Konsumex Somodyi Dezsö responded that the Hungarian side would in no event pay compensation to Czechoslovakia or Austria, because the agreements on the construction of the dams did not stipulate penalties in the event of breach.

Hungary was given conditions for repayment of loans from the European Community, which were only possible by collateralizing larger investment projects. In addition, the Hungarian partners agreed with Austrian companies that were interested in completing Nagymaros to compensation in the form of being preferred for construction work in preparation for the World EXPO in Hungary in 1991.

These agreements caused Czechoslovak active measure "SLAP V" to become a marginal and insignificant effort to reverse developments through influencing Austrian businessmen previously involved in the construction of the waterworks. There were also "gross" errors in the implementation of the active measure, when other secret agents such as "Kato", who was to lean on Austrian partners, were chosen incorrectly as they were in no way able to engage with Austrian decision-makers.3