On 20 October 1986, a proposal for an active measure (AM) code named "SAZBA" was filed within the wider operation "ÚROK", which comprised operations to support Czechoslovak foreign trade and to discredit US economic policy. The proposal was filed by Cpt. Karel Buralt „Zika“ of Section 47 (Middle and Far East) of Directorate I of the SNB - Czechoslovak intelligence. The aim was to damage the reputation of the USA (the main adversary) and the US firm Pecten, and to disrupt its penetration into the Syrian economy. [1]

The US oil concern Pecten Petroleum Company (a subsidiary of Shell USA) operated in the Syrian Arab Republic (SAR) as part of a consortium with Royal Dutch Shell, and Deminex from West Germany. It focused mainly on the discovery and exploration of new sources of oil, drilling of wells, extraction and transport.
In 1977, it obtained a concession to explore 20,000 square kilometres of land in northern Syria. In 1984, the US consortium discovered large quantities of light, sweet crude oil in the Thayim area near Dayr az Zawr. This provided a much needed and sought-after boost to the Syrian oil industry and economy. The low-sulphur content oil from this region brought with it the positive outlook that Syria could reduce its own light crude oil imports by up to $ 200 million. Production estimates confirmed an initial daily output of 50,000 barrels after the oil field was connected to a pipeline at the end of 1986. In 1985, Syrian General Petroleum Company and Pecten established the Al Furat Petroleum Company.
According to Czechoslovak intelligence, the American company Pecten had political motives - to change the internal and external orientation of the Syrian economy through the control of oil extraction. According to Czechoslovak intelligence some of the approximately 600 employees of the Syrian branch of Pecten Petroleum Co. were in fact CIA agents. After the establishment of the Syrian-American company Al Furat Petroleum Company, the pro-American Deputy Minister of Oil and Mineral Resources Nadir Nabulsi became the company's first president. In addition to Pecten, which had a 20% stake in Al Furat, Shell also had a 20% stake and West German Deminex had a 10% stake. Syrian Petroleum Company held the remaining 50% stake in Al Furat.  Pecten was a competitor of TECHNOEXPORT, a Czechoslovak “podnik zahraničného obchodu“ or PZO (a foreign trade company) and according to information from agents of the Czechoslovak intelligence service, the Americans were trying to discredit this Czechoslovak enterprise.

With regard to developments in Syria, it seemed desirable to Czechoslovak intelligence to carry out a series of actions to discredit Pecten Petroleum Co. and its activities in the economic and political sphere. One of these operations was the implementation of active measure "SAZBA" through secret collaborators of the Czechoslovak intelligence residentura in Damascus. Upon instruction from Czechoslovak intelligence, agent "Mustafa" informed the regional leadership of the Arab Socialist Ba'ath Party and the Minister of Transport Yousef Ahmad about some of Pecten's practices in order to trigger an investigation into corruption. The content circulated was that Pecten had not paid service fees for its aircraft at Damascus airport for 3 years (airport charges - aviation fuel, crew accommodation, food).[2]

It was claimed the free service was achieved by bribing Ministry of Transport employees and Damascus airport staff. The information was previously obtained through an agency network. Agent "Mustafa" obtained key information that the Syrian leadership were vigorously monitoring corruption in light of the drop in oil export revenues as a result of falling world market prices. He requested that Ba'ath investigate the matter at Damascus Airport. At the same time, through a good relationship with Minister of Transport Yousef Ahmad, he also secured the Ministry's own parallel investigation into the corruption affair in order to prevent the case being swept under the carpet. Concurrently, a disinformational "whisper" was started about corruption in which the CIA was also involved. Upon the instructions of Minister Yousef Ahmad, an investigation was initiated into three ministry and airport officials, who had been charged with corruption.

With the help of Czechoslovak intelligence, this entire affair involving corruption and the attendant investigation, made its way into the Syrian media. Al Furat Petroleum Co. prepared a new tender for the construction of an oil pipeline. The tender was to be officially announced in early October 1986, and the conditions were prepared by Ted Winter, the lead technician at Pecten. The Czechoslovak PZO TECHNOEXPORT, which was the usual supplier of oil equipment to Syria, also submitted a tender. According to confidential information, however, Pecten's management tried to discredit the TECHNOEXPORT tender in order to push through the offers of American companies, especially Braun and Rooth.

After its implementation in November 1986, active measure “SAZBA” seriously damaged the relationship between Pecten Petroleum Co. and SAR through the corruption scandal it set in motion. [3]

In 1986, Czechoslovak Technoexport completed a ninety-two-kilometre pipeline that connected the Thayim field with the Iraq-Syrian oil pipeline, which had been unused since 1982. According to estimates by Syrian government officials, production levels in Dayr and Zawr were expected to increase to 100,000 barrels per day in 1988. 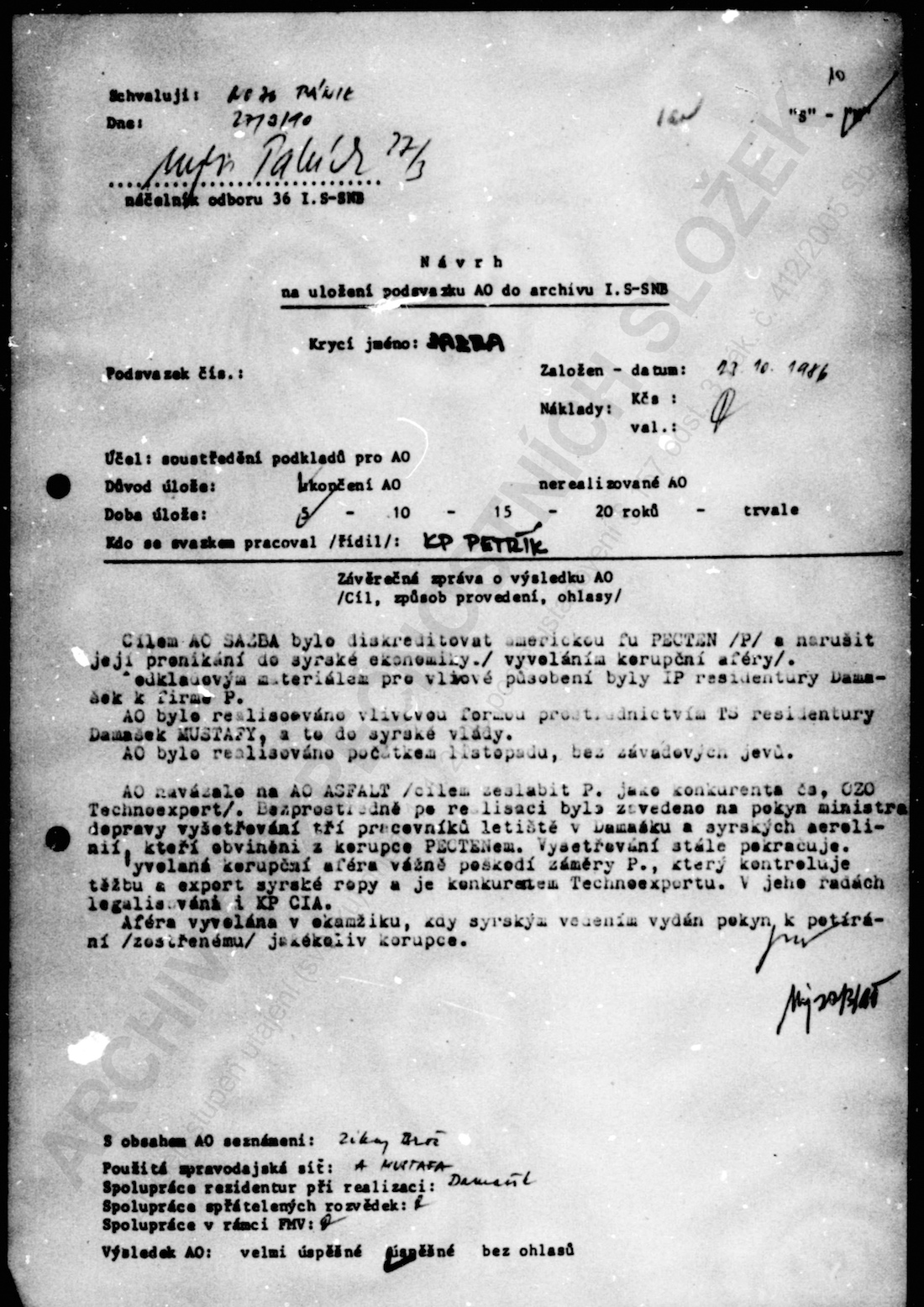