On 24 September 1986, a proposal for an active measure code named "REMUS", within the framework of operation "ÚROK" (means: interest rate) was submitted to → Section 36 (active and influence measures) of Directorate I of the Federal Ministry of Interior of Czechoslovak intelligence. The proposal was submitted by 1st Lieutenant Viliam "Prusák" Mikula from the operational → Section 69 (scientific and technical intelligence) of Directorate I of the FMV and the proposal was drafted by Cpt. Dušan "Bohdalík" Wittner of Section 36.

In a state-controlled and poorly functioning planned economy, the main goal was to create, in the interests of the Czechoslovak economy, conditions for the more active involvement of the Italian engineering company FIAT in cooperative relations with the relevant Czechoslovak production and research organizations. A revitalisation of the agreement on scientific and technological cooperation between the Federal Ministry of Technical and Investment Development and FIAT was sought.​[1]

Another aim was to discredit FIAT's representative in Czechoslovakia at that time Alberto Tiazzoldi (who also acted as sales representative for FIAT in Poland), further to stir up conflict between major Western European manufacturers, FIAT Italy and KUKA Germany, which was then to have an impact on the official economic interests of the countries involved. Of course, positive on the Czechoslovak side and negative on the West German side. FIAT was a world leader in automated production systems in the automotive industry.

At first, an agreement was concluded between FIAT and Czechoslovakia on scientific and technical cooperation, which was signed in 1977. However, in that very same year stagnation set in, which lasted until 1986 due to, according to the Czechoslovak side, the passive attitude of FIAT. Blame was also laid on Tiazzoldi himself, the head of the eastern division of FIAT's management, whose actions allegedly had a negative influence on relations with the Czechoslovak Socialist Republic. The StB assumed that Tiazzoldi was either a collaborator or a direct employee of the Italian intelligence service, or the US special services.[2]

An → ideological collaborator of the intelligence service "Makov" was engaged to carry out active measure "REMUS". He was officially active in Italy and had direct contacts at FIAT. The collaborator was managed by the residentura of Czechoslovak intelligence in Rome. Another was Ing. Ivan Paggio, an expert advisor-interpreter working with FIAT in Czechoslovakia, vetted by Directorate XI of the FMV (StB counter intelligence unit for the protection of the economy).

The active measure lasted from May to October 1987. During contact with important FIAT employees, disinformation was spread through ideas, which were presented as personal unofficial opinions regarding relations between the Czechoslovak Socialist Republic and FIAT. The disinformation was based on credible sources. They were prepared by IC Makov with the help of information from Ippolito Fusco, director of Alfa Romeo Naples and Ing. Esposita, CEO of Pianelli Traversa, Torino (38 percent of FIAT's turnover).

The next phase exploited the fact that at the end of 1986 a trip to Italy was planned for a Czechoslovak delegation of experts in robotics, which also included a visit to FIAT. It was safe to assume that there would be at least 1 collaborator of Czechoslovak intelligence (scientific and technical intelligence) in the delegation, who then did indeed disseminate information according to the intelligence service's plan.

The essence of the information that intelligence collaborators were to unofficially spread was that FIAT had not succeeded as planned in acquiring a share in the production of the new Škoda because KUKA of West Germany, which had won the tender, had become the main supplier of production technology after Czechoslovak intelligence had submitted information to the authorities that there were some embargoed components in FIAT's offer (goods whose import into socialist countries was blocked → CoCom), in relation to which the US intended to cause problems if FIAT were to win. On the grounds of this deliberate disinformation, the impression was created that FIAT could have problems in securing the investment action in question. In parallel to this, KUKA was alleged to be securing the import of some embargoed components pursuant to a contract with Czechoslovak engineering works (the StB recommended carefully selecting specific components for this disinformation in order to make it seem credible). 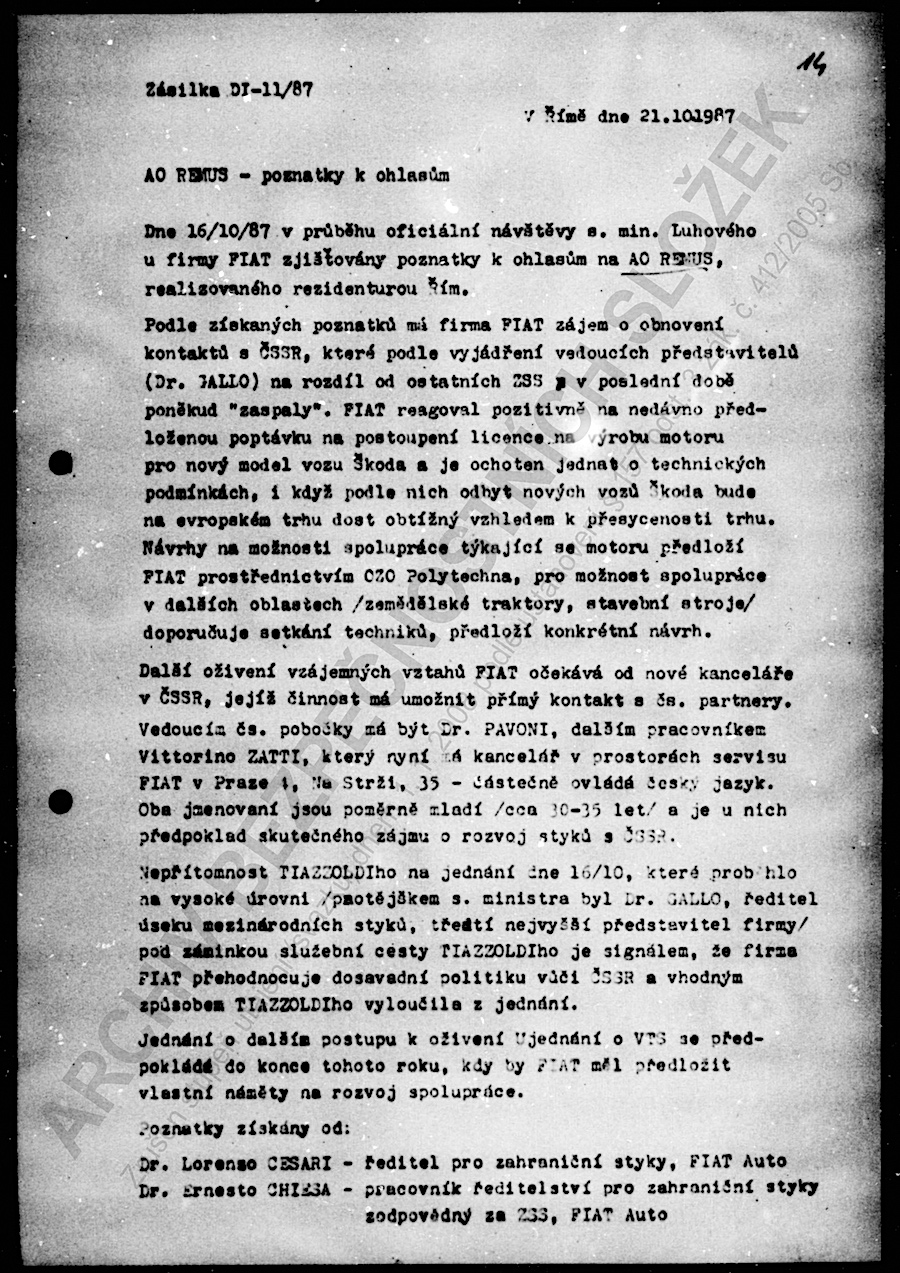 FIAT believed the information it was fed. It believed that in the Czechoslovak Socialist Republic in general, there was considerable distrust of FIAT and a prevailing view of its unreliability, as a result of the unilateral freezing of the agreement on scientific and technological cooperation between FMTIR and FIAT a year after the signing of the agreement.
The approach of the official FIAT representative at that time was allegedly negative – specifically, Tiazzoldi was the worst FIAT rep that Czechoslovakia had ever dealt with. His behaviour broke down relations rather than building them up. The StB further underlined that, despite these negative trends in Czechoslovakia, there were significant figures who highly appreciated FIAT's qualities and would be willing to improve Czechoslovak-Italian economic and political relations to ensure that FIAT received from Czechoslovak engineering works far greater opportunities than it had before. [3]

In connection with the aforementioned, the StB further argued that it would be best if FIAT reviewed its strategy in the CSSR and appointed suitable representatives to carry it out. Such persons should, unlike Tiazzoldi, have a genuine interest in the development of mutually beneficial relations, and not in submitting unilateral proposals disadvantageous to the Czechoslovakia as had been the case until then. It was important to the StB to revive the economic cooperation agreement between the Federal Ministry of Technical and Investment Development and FIAT. FIAT was also to reopen an office in Czechoslovakia, which it had closed in 1980.

The active measure 'REMUS' was regarded as very effective. Alberto Tiazzoldi's discreditation and the revitalisation of the agreement were successfully achieved. Tiazzoldi was no longer present at negotiations on 16 October 1987 with Czechoslovak minister Ladislav Luhový, where FIAT was represented by Gallo. Tiazzoldi was smoothly phased out and the justification put forward for his absence from the negotiations was another urgent business trip. His absence signalled a turnaround. FIAT responded positively to the transfer of the license for the production of a new model of Škoda engine and was willing to discuss the technical conditions.