The objective of this active measure code-named "HAM", which was part of the broader Operation "ÚROK", was to harm US trade relations in Japan, affecting bilateral trade agreements. The proposal was filed on 13 September 1988 by members of the StB 1st Lieutenant Ferdinand "Dolňák" Valent and 1st Lieutenant. Ing. Eduard "Zelina" Pálka both from the Czechoslovak intelligence residentura in Tokyo, together with → Section 47 (Middle and Far East Section) to → Section 36 of Directorate I of the FMV - (Active and Influence Measures Section).​[1]

In preparing this active measure, the intelligence service took into account current events in Japan. At the time, Japanese-American negotiations were underway for a new agreement on the import of agricultural products from the USA. The previous one had expired on 31 March 1988. The US terms in the new draft called for the repealing of restrictions on imports of agricultural products into Japan and the termination of the Livestock Industry Promotion corp., an organization involved in the distribution and pricing of imported meat. America's demands were unacceptable to Japan, which needed to protect its own farmers that constituted the support base for the ruling Liberal Democratic Party. The US placed pressure on Japan to apply Article 301 of the Commercial Code to its economic relations and to submit the whole issue to GATT (General Agreement on Tariffs and Trade), which would lead to a political escalation of tensions. In the end, on 20 June 1988, Japan signed an agreement in which it undertook to liberalize beef imports from 1 April 1991, and to increase imports of this commodity by 60 thousand tonnes annually between 1988 and 1991.

Following the cancellation of import quotas, Japan was to introduce fixed tariffs step by step between 1991 and 1993, and in the subsequent period tariffs were to be negotiated in accordance with GATT provisions. At the same time, Japan undertook to end the involvement of the Livestock Industry Promotion corp. in beef imports. The signing of the agreement was significantly affected by pressure from Japanese farmers and was only signed on the third possible deadline. Farmers threatened measures that would lead to a 20% reduction in grain imports from the USA and their replacement with imports from other countries. As a result of concerns about the allowing of further imports of cheap beef from the USA, farmers in Kyushu symbolically burned a US car, oranges and an American flag at the end of April 1988. Farmers' representatives Mitsugu Horiuchi - the president of the Central Union of Agricultural Cooperatives - and Takahiro Yokomichi - Governor of Hokkaido Island - demanded urgent countermeasures in the form of 100 billion in compensation for losses and lower interest as countermeasures to reduce the negative impact of the agreement. These conditions were "fertile soil" for the subversive operations and disinformation campaigns of communist intelligence, including the “little sister” of the KGB, the Czechoslovak intelligence service – Directorate I of the FMV.

The active measure was implemented in two forms. An anonymous letter was first sent to the US Embassy in Tokyo in the name of an "organization supporting Japanese farmers". The Japanese Ministry of Agriculture was the next recipient, along with a network of department stores that sold American meat.[2]

Czechoslovak Directorate I of the FMV based its actions on the knowledge that in the past already, serious threatening letters had been sent to the Japanese authorities in the interests of protecting Japanese economic interests.

The Japanese government is unable to stop the US attack on the interests of Japanese farmers, and we are therefore forced to take action to defend ourselves. Beef imported from the US and sold in Japanese shops will be infected with a poison that will make it impossible to eat. The responsibility for the victims will rest with government officials who do not defend Japan's interests.

These measures will remain in effect until the Japanese government has stopped increasing meat imports from the US.

Your store is one of those in which meat will be infected.
Note: Photo of potential poison attached 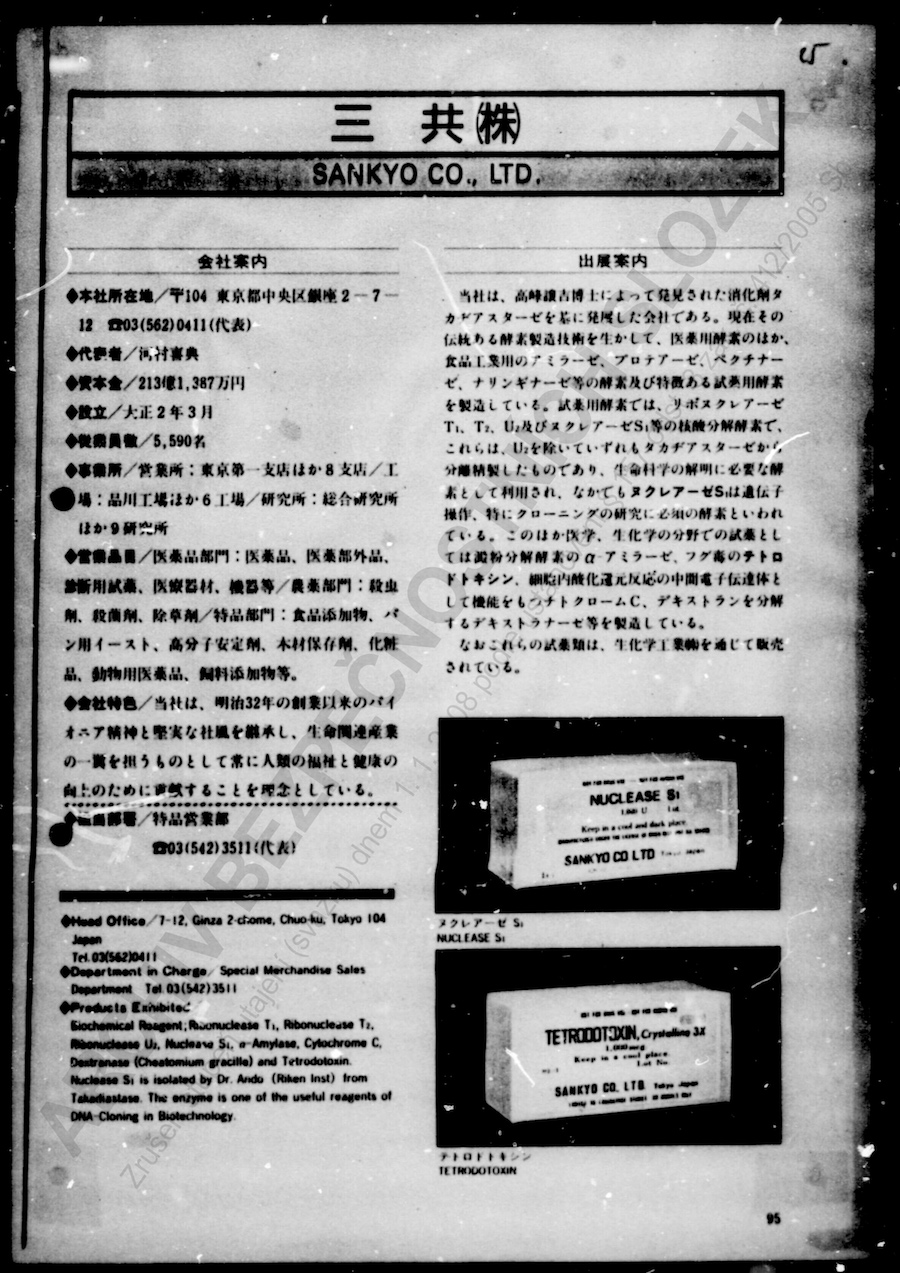 The intelligence service also drew inspiration from a case involving extortion against the Japanese company Morinaga, where blackmailers threatened to poison the company's regular retail products unless they were paid a ransom. The case had been widely publicized in the Japanese press several years before. The fake letter produced in an "StB Workshop" for the purpose of active measure “HAM” contained threats, whereby an "organization supporting Japanese farmers' interests" claimed it would poison US meat with special poison unless Japan ensured it was taken off the market. The letter was accompanied by an analysis and list of effects of the poison. In case it might prove useful, during the planning of the active measure, a more detailed explanation was prepared explaining that the poison was a substance with similar effects to the highly toxic tetrodotoxin (produced by the Japanese company Sankyo and used as an antidote to Fugu fish poisoning). Another form of the AM was a leaflet called "In Support of Japanese Farmers' Interests!", which was delivered to 21 selected addresses (mainly the addresses of department stores Daimaru, Matsuzakaya, Seibu, Mitsukoshi and others) and contained an appeal to boycott American meat in Japanese stores. The letters were written in English with intentional mistakes. 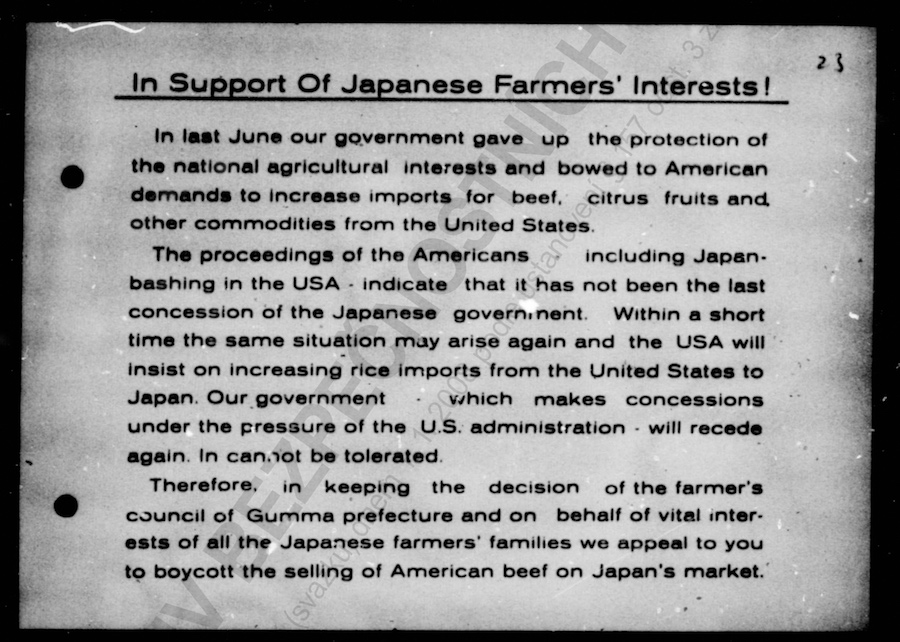 The active measure was carried out by members of the Tokyo residentura at night in two stages – 5 December and 13 December 1988. After implementation, protest actions took place at the end of 1988. The Japanese Government's measures in connection with meat imports resulted in the withdrawal of high compensation to livestock farmers and the introduction of strict quality controls on imported meat. The population's resistance to the liberalization of meat imports was concentrated in the agricultural areas of Tohoku, Hokkaido and Kyushu, and took the form of protest rallies. The protests were attended by up to 6,000 participants, mainly organized by Japanese trade unions, as well as individual protests (the suicide of Abe of Ehime).[3]

The government's measures to temper the protests involved the revision and stabilization of prices of agricultural products in order to protect farmers from fluctuations. In addition, the Japanese government secured the export of high-quality Japanese meat to the US.

Negotiations between the Japanese Prime Minister Noboru Takeshita and President Bush failed to resolve the disputed trade issues. There were differences of opinion over the issue of US meat exports to Japan. The Japanese Prime Minister feared that this issue could destabilize the internal political situation as a result of the elimination of Japanese farmers, therefore it was agreed to postpone the solution of the matter with the US for the time being.

The Czechoslovak intelligence service concluded that active measure "HAM" had fulfilled its purpose and had been effective. It contributed in part to the Japanese government's concessions on the issue and helped lay the foundation for further protests by farmers against imports of other agricultural commodities from the US.[4]