When the magazine "Listy" started appearing in Rome in the early 1970s, its founder and editor Jiří Pelikán immediately became one of the most heavily surveilled targets of communist intelligence. The magazine published backstage information from Czechoslovakia and was also primarily intended for readers there. The surveillance of Pelikán abroad was coordinated with the Soviet KGB from the start. The StB tried to intimidate and silence Pelikán, and in 1975 organized an unsuccessful assassination attempt (AM VAMPÍR II) on his life. His physical liquidation was repeatedly discussed by representatives of the FMV and the PLO in 1981.

A document from Czechoslovak intelligence Directorate I of the FMV - sent on 3 December 1981 by the Chief of Section 36 (active and influence measures) - Col. Václav Smíšek, code name "Stárek", to Col. Ondrej Dovin, first Deputy Chief of StB intelligence, clearly evidences that at the highest level of intelligence and the FMV, and with the knowledge of Minister Jaromír Obzina, negotiations with representatives of the Palestine Liberation Organization (PLO) took place in 1981.

While Section 36 was not sufficiently informed about the outcome of the negotiations, Lt. Emil Hradecký (Chief of the Department of International Relations of the Office of the Ministry of the Interior of the Czechoslovak Socialist Republic), and Deputy Chief of Section 47 (Middle and Far East) Jaroslav Soldán, code name "Seman", were partially informed.

This was however an extremely serious affair. The Section for active and influence measures, through its Chief Smíšek, referring to a meeting in June 1981 and consultations with Section 31 (emigration), was fundamentally opposed to the measures proposed for operation "Pelikán" where the Palestinian side wanted to go as far as to physically liquidate Jiří Pelikán, an emigrant who was opposing the communist regime from abroad. Smíšek seems to have been afraid to share the responsibility and argued that Jiří Pelikán was a well-known figure, a member of the European Parliament, and his liquidation would draw too much attention and would cause more harm than good to the interests of the StB, and the Communist regime. [1] 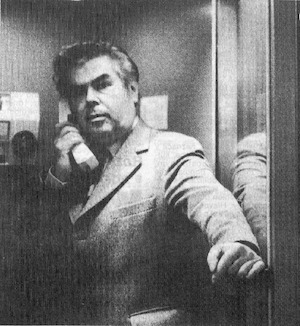 To Stárek it instead seemed more appropriate to ask the PLO to assist in the case of emigrant Jan Tesař by "only" arranging his kidnapping and long-term secret detention in a Palestinian refugee camp "while ensuring that he remains alive and healthy". However, it is worth noting that Smíšek the Chief of Section 36 said that if the PLO again proposed to carry out operation "Pelikán", it would be necessary to re-consider the plan in his case and not to implement the operation as proposed in the case of Tesař, i.e. kidnapping and secret detention in a Palestinian refugee camp. In the end, neither of the abovementioned operations against the said emigrants were carried out. They most likely had no idea what the StB and PLO had been planning for them. In the case of Jiří Pelikán, however, this was not the StB's first attempt to assassinate him. [2]

Further information that follows from the documents is substantial testimony to the criminal practices of the StB. Section 36 of the StB (active and influence measures) promised to participate in the publication of copies of the book "Endeckted Judentum" (by which the StB probably meant Entdecktes Judenthum), which was to speak about the roots of Jewish aggression all the way up until Zionism. The book was to be translated into English and handed over to the PLO to be used for their purposes. Equally serious was the preparing of a list of 170 addresses of “pro-Zionist” companies from Switzerland, England and the USA for use by the terrorist PLO. [3] 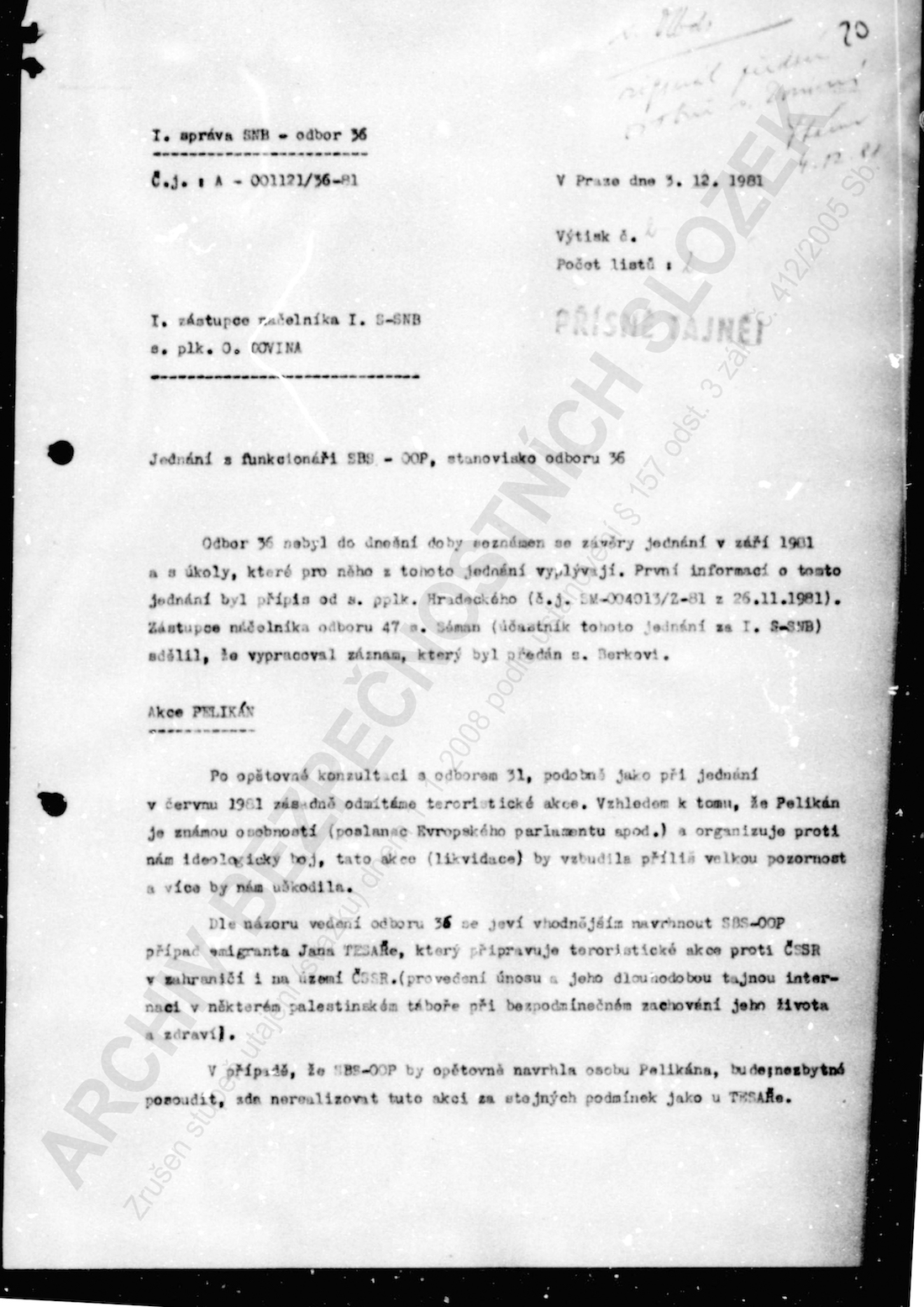 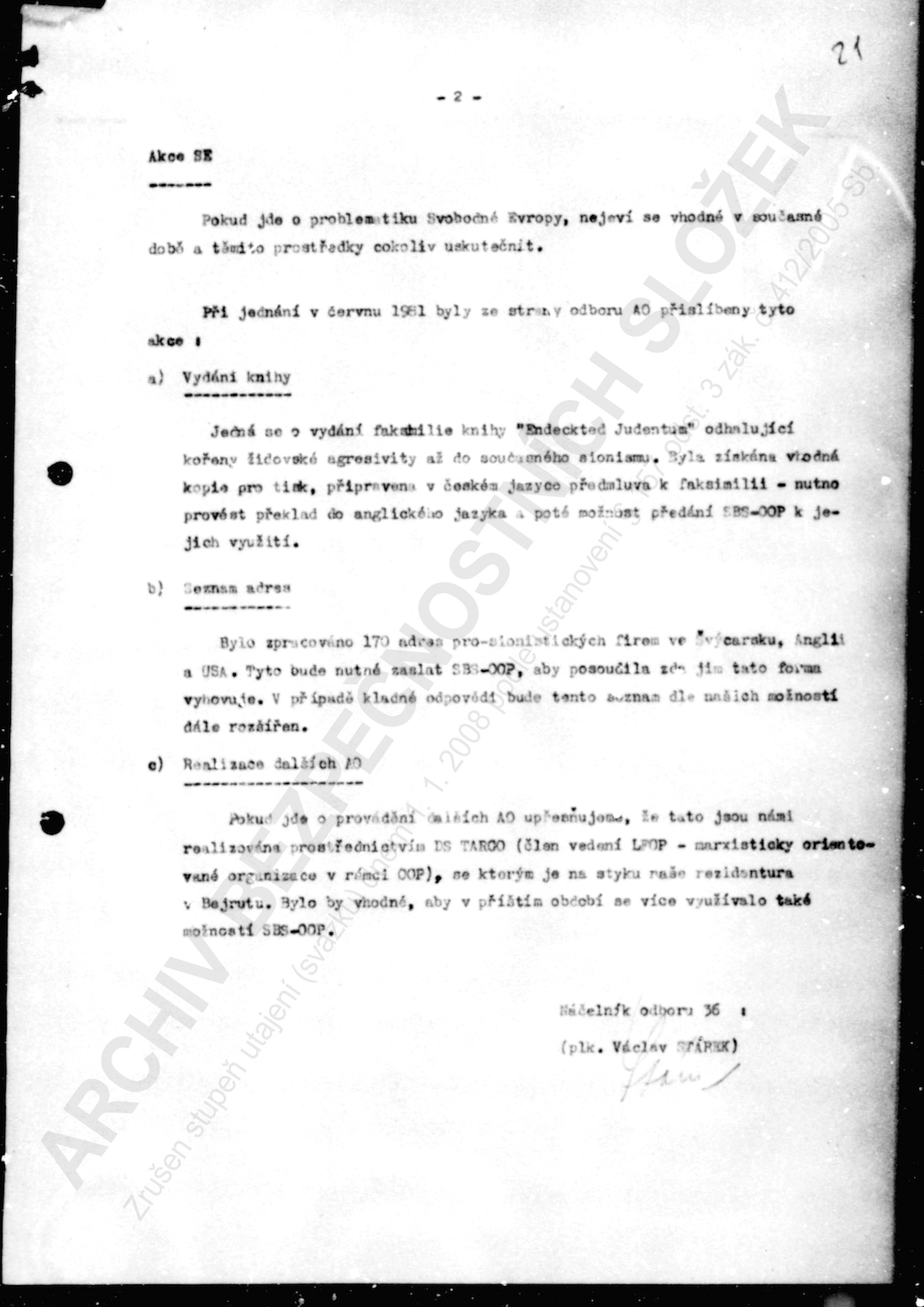