Several active measures were proposed as part of a broader plan of long-term psychological operations (later → active measures) against NATO, code named "LONG". On 27 March 1973 they were submitted and subsequently approved by the 1st Deputy Chief → Directorate I of the FMV- StB intelligence Col. Mgr. Zdeněk "Žemla" Žlábek PhD. The aim was to deepen the conflicts between NATO member states, especially its south-eastern wing.

The following operations were proposed: 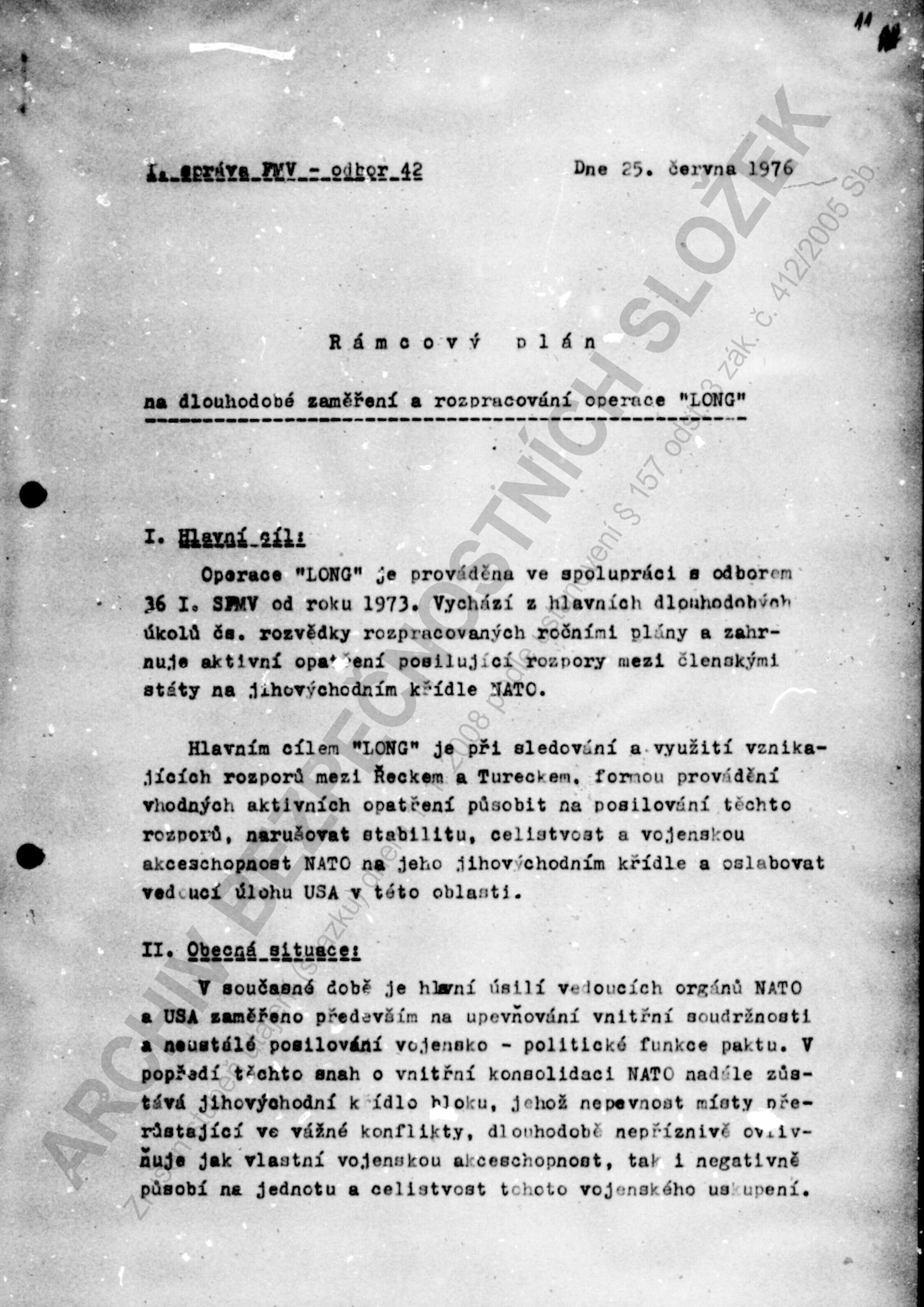 The entire range of "LONG" psychological operations began with an initial operation code named "OMAR", proposed by members of Directive I of the FMV Major Jan Klimeš ("Buldra") and Lt. Col. JUDr. František Zajíček ("Zachystal"). This psychological operation was aimed at deepening conflict between the Greek military junta and Arab countries based on the reported fact that the new oil refinery near Corinth supplied the US 6th (Naval) Fleet. According to the intelligence service, their presence in Piraeus was directed against Arab states.

The official explanation of the Greek military junta did not logically explain the presence of the US 6th Fleet in Piraeus to Arab countries. The former Greek military Chief of Staff and 1972 putsch leader published his thoughts in a magazine named Acropolis. In the article he discussed the dangers of granting home facilities to the US 6th Fleet in Greek ports and openly indicated that Americans were using Greek ports against Arab countries in favour of Israel. Something along the same lines was said by US President Nixon, who had to deny it later in 1972.

At the end of November 1972, the agency network of the residentura of Czechoslovak intelligence in Athens obtained a report that the entire capacity of the newly opened Agioi Theodoroi oil refinery in Corinth would be available to the US 6thFleet.The Greek government allegedly concealed this fact from Arab countries due to concerns that these Arab countries might refuse to supply oil to the country, which would in turn lead to a downturn in the Greek economy, and be reflected in internal politics. The owner of the Motor Oil Hellas refinery was the shipbuilder Vardis Vardinoyannis, a close friend of the Deputy Prime Minister Nikolaos Makarezos.2

The psychological operation took the form of leaflets in English and Greek in the name of the Organization of Free Greeks, which were supplied by Bulgarian “Friends” (1st main directorate of the Komitet za dǎržavna sigurnost). The Bulgarians had already carried out several disinformation campaigns in the past in the name of this organization. Bulgarian intelligence had also managed to infiltrate the Athena Daily Post, through which they spread further disinformation. Agency reports obtained by Czechoslovak intelligence, along with the content of the Athena Daily Post article, were further modified to spur Arab countries on in their anti-American sentiment against Greece, and particularly against Motor Oil Hellas.

The English leaflets were distributed from Rome by the residentura of Directorate I of the FMV to Arabic daily newspapers, Arab embassies in major European countries, and magazines where the text of the leaflets was expected to be used. Specifically, e.g. to the Bureau Arabe de Presse et de Publicationsin Paris, which was distributed by the French central authority, German authorities and US authorities.Further to Evenements et Perspectivesand others. These were all newspapers and magazines that had a great impact on the opinions of Arabs living in the West. In the first phase of the operation, English and Greek versions of the leaflets were distributed to the Arab diplomatic missions in Athens. In the second phase, only the Greek text was sent to the Greek central authority and the press. The distribution of leaflets in Athens was to create the impression that the Italian organization had a connection to Greece.

The technical department of → Section 36 of the Directorate I (psychological operations/active measures) prepared the headed paper, and addressed the envelopes. Bulgarian “Friends” also collaborated in making the operation a success.3

In the middle of 1976 → Section 42 of Directorate I of the FMV (Western Europe and NATO) presented a framework plan for the long-term alignment and development of operation LONG, stating, inter alia, that the US had managed to achieve a certain level of peace in the south-east wing of NATO despite the expectations of communist intelligence, which carried out active measures and subversive operations in the area.The United States of America signed a new four-year military cooperation agreement with Turkey, which allowed the use of military bases by Turkey on more favourable terms, and also managed to conclude a four-year military cooperation agreement with Greece. Against this background, the main objective of intelligence in the implementation of the long-term operation "LONG" in the area of NATO's south-east wing remained the weakening and discreditation of US and UK politics.

Czechoslovak intelligence did its best to undermine efforts to ensure a smooth relationship between Greece and Turkey, to further deepen disputes and increase tensions between them, while exploiting tensions between ethnic minorities in the Aegean, Cyprus and the Balkans. 4

n the operation Directorate I of the FMV used → agencies: