Dear readers, we will soon be introducing a series of articles on disinformation, which we have titled Czechoslovakia in the 1948–1989 (dis)information war.
If everything that was written about the "communist paradise" and what we heard from the official state-controlled media before 1989 were true, our country would be the economic tiger of Central Europe today. The groundwork was laid. In Europe after the Second World War, Czechoslovakia's starting position was far better than that of Germany or Austria. After the subsequent "division of Europe", however, we were left in the group of states that embarked on the road to building up communism under the dictates of the Soviet Union. Forty years later, this dream of "heaven on earth" came to an end, our eyes were opened, and we saw that the experiment in the command economy had failed in competition with the Western market economy, which to this day determines the pace of innovation, technological development, production quality, economic growth and the well-being of its people. 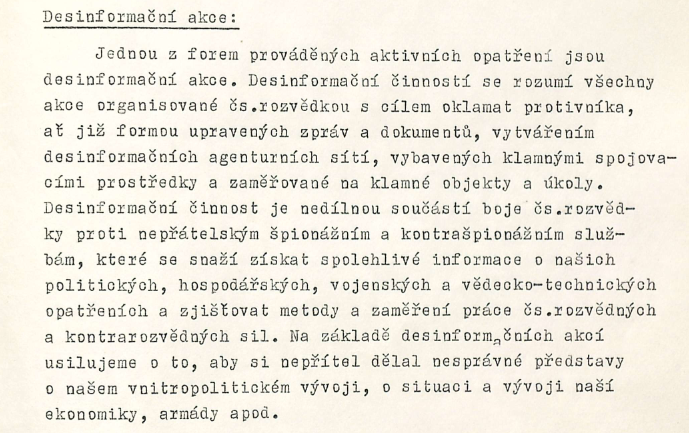 FIG. One of the pillars of communist intelligence activities was disinformation

For several years now we have been a fully-fledged member of the European Union, which is one of the most economically advanced parts of the world, with all its attendant advantages and disadvantages. Thirty years after the Velvet Revolution, however, our freedoms are under attack once again and we are embroiled in a new conflict. A virtual cold war. We are facing targeted attacks on society, individuals and institutions, which are the pillars of our democracy. Contemporary Russia is waging a hybrid war not only against its own citizens, but also abroad against democratic states, European and transatlantic institutions, etc. This conflict is taking place in both cyberspace and the media.

Many, especially the older generation, are experiencing a kind of déjà vu. Yes, the present post truth era can be clearly understood in light of the past, where the answers to today's questions can be traced. We will present to readers the phenomenon of disinformation and propaganda from the perspective of the communist state, where a well camouflaged lie, as in the story of the Emperor's new clothes, "overshadowed" reality, metastasized into society and became a tool for influencing public opinion, and spreading "alternative facts" and half-truths.

This phenomenon, forming part of today's hybrid warfare, stems from and is directly connected to the Cold War conflict between the Communist bloc and the West. It is therefore good to know, or to introduce to the public, a brief history of disinformation activities in their institutionalized form, as used on a massive scale by communist states against their "enemies" – Western democracies, and primarily the US. We will consider this phenomenon from the perspective of the Czechoslovak security forces and the direct influence of Soviet advisers on these activities. We will present the tools and methods that were used to spread fake news, the channels used to disseminate disinformation, and selected secret influence operations – active measures employed against the principal enemies, the US and NATO, etc. 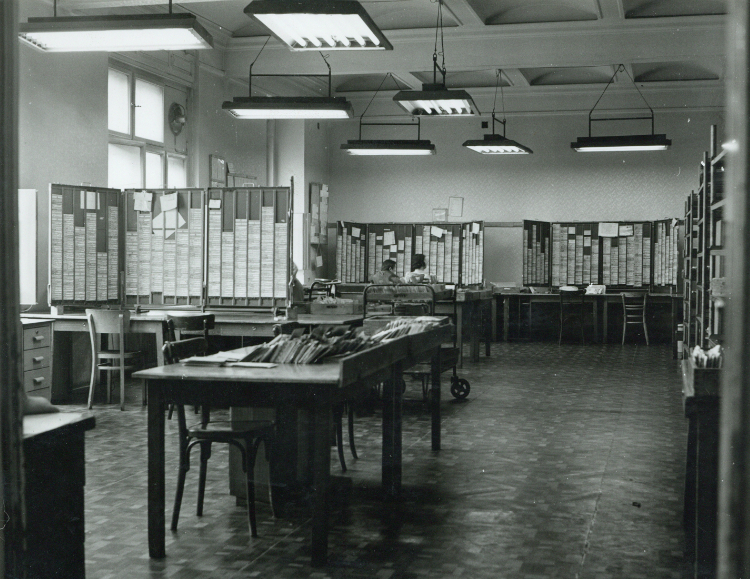 FIG. StB workplace for checking international mail sent to or from foreign capitalist countries. In the analogue era, this was one of the most significant tools of information control and an important source of information for the communist leadership. Source: CDTR archive

Prologue - Failures of individuals in the past and inconsistency in checking sources as (un)intentional sources of disinformation?

In the pilot paper we present the issue from a different angle. We will examine the personal testimony of a former professional communist border guard and his confrontation with the archives. We will point out how important it is to know your sources and verify information. The first article will introduce the border guard himself in detail and the second will compare his broadcasted testimony with the facts (please see the links below).

Stories told by living witnesses, or their testimonies about life in totalitarian Czechoslovakia, are currently very popular. One group comprises the victims of the repressive totalitarian state and the other the people who preserved that state. In both cases, healthy skepticism, critical distance and closer investigation are required.

In the case of witnesses who lived through the historical events of the 20th century and their testimonies before the camera and other recording media, it is necessary to carefully evaluate, verify and correctly interpret the testimonies of those who stood on the imaginary second – ruling – side of the barricade, or to annotate their "unverified" testimony with appropriate commentary. In this area, consulting the archives is essential to prevent the production of new "disinformation" or "alternative facts".

Anyone who carefully and systematically examines the archives from our recent past has the opportunity to discover for themselves the intricate internal structure of communist power. In order to understand how the individual parts fit together and how they worked, it is necessary to be able to break the complex mechanism of power down into the smallest detail. Today, we should not forget the fact that the Ministry of the Interior was, before 1989, a state department with a hierarchical structure, under the strict control and close scrutiny of the leaders of the Communist Party, with internal control mechanisms, a meticulous filing system and an information flow regulated by secret sub-regulations. The choice of cadres was very selective on the basis of cadre assessments, marital status, class origin, etc.

At present, there is no equivalent state institution. The pre-revolution Ministry of the Interior was one of the key instruments of power of the Communist Party, and personnel selection rules were strictly adhered to. Proven "working class" cadres, who underwent thorough political education and training, formed the backbone of a regime that was almost paramilitary. Each internal document went through a rigorous approval process and was carefully listed in official files and administrative records. Everything was carefully sorted, following the slogan: "Socialism is, above all, accounting". (Nikolai Ivanovich Bukharin)1

It was therefore not possible to falsify official documents (or operational records), or embezzle carefully guarded allocated funds at will. There was a constant threat of punishment (pay reduction, demotion, reassignment ...) and/or dismissal, loss of all social benefits (loss of allocated housing) and, in the worst-case scenario, imprisonment. Likewise, it was not possible to conceal any extraordinary incidents on the militarily guarded borders. Service rules regulated every aspect of life.

As in today's world, in which freedom and plurality of opinions are commonplace, the communist organism did not have a uniform workforce, but freedom of opinion was limited by official ideology. Reporting others and political engagement were important tools of the party struggle and career development. In order to understand the past in its entirety, it is essential to conduct interviews with former functionaries, but any attempt to make light of their actions or to hold back should be done with caution and requires a great deal of rigour and expertise on the part of the interviewer.

The recent legal dispute between the current Czech Prime Minister Andrej Babiš and the Slovak Nation's Memory Institute based in Bratislava over the legitimacy of his records as a former secret informer of the Communist State Security also serves to prove our point. The lower Slovak court instances often treated the testimony of former state employees – public officials – ex-members of the Communist State Security and members of the pre-revolution Communist Party, as entirely credible. In the end it was only the decision of the highest Slovak court – the Constitutional Court – in October 2017 that pointed out the reduced credibility of these persons. “The Constitutional Court states that witnesses who were former members of the State Security of the Czechoslovak Socialist Republic, were actively involved in the promotion of the Communist regime. The working methods of State Security officers were, among other things, lies, and immoral and condemnable practices, and they did not hesitate to violate the basic principles of the democratic rule of law, international treaties and even their own laws to fulfill the aims of the Communist regime.”2