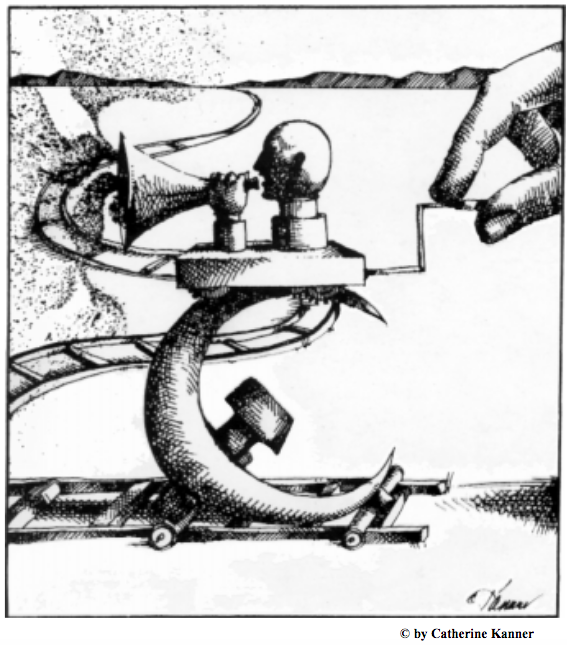 The Reagan administration responded to the massive disinformation campaign of the Communist bloc headed by the Soviet Union in 1981 by setting up an interagency group to take active measures to counter these activities and monitor them closely. Its establishment was actively promoted by the CIA director at the time William Casey. The group comprised the CIA, the FBI, the Department of Defense, the Arms Control and Disarmament Agency, the Defense Intelligence Agency (DIA), the Department of Justice, and the United States Information Agency. The group eventually produced several special reports. We have published the first report: Forgery, disinformation and influence operations of the USSR in US documents, dated October 1981, in our project.

The main output of the working group includes the following documents:

The working group operated until the dismantling of the USSR and published its last report in 1992 (Soviet Active Measures in the 'Post-Cold War' Era 1988-1991).

In March 1988, the United States Information Agency (USIA) published a 143-page report entitled "Soviet Active Measures in the Era of Glasnost". This was another one of the important reports produced by the interagency working group on active measures. On 14 April 1988, the international desk of the Czechoslovak News Agency (ČTK) published an abridged version of the USIA press release from 6 April 1988 in a special internal report. The communist intelligence service relegated the report to its files concerning active measures. It is of course likely that they had a complete copy of the US report. These reports analysed in great detail the disinformation campaigns that the US side knew of.

Soviet Active Measures in the era of Glasnost

Since the Geneva Summit in 1985, there has been a significant shift in the tactics of "grey" Soviet active measures and changes in the ranks of those who managed them.

The main objective of Soviet active measures in the West has become creating the widest possible "united front" against the Strategic Defense Initiative and the undermining of the US position in arms control negotiations. This has led the Soviets to adopt a much milder tone than in the past. 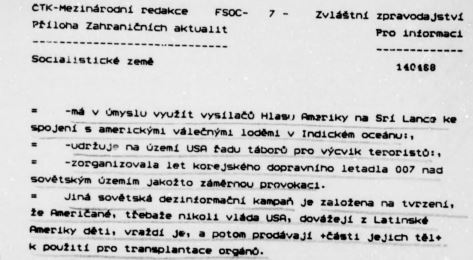 International groups controlled by the Soviets, such as the World Peace Council have adopted a conciliatory stance with the aim of attracting to their side "peaceful" activists of all shades.

Outwardly independent Soviet mass organizations, such as the Soviet Peace Committee, has established a number of direct contacts with Western citizens in the hopes of using these channels to convince them of the logic of Soviet views on the Strategic Defense Initiative and disarmament.

The Soviets have also taken the lead in organizing new international "peace" forums and groups, largely composed of artists, academic dignitaries, prominent public figures and businessmen, in an effort to open further avenues to influence the Western elite.

In all areas, the current Soviet tactics are based on providing an image of an open USSR with open policies, and on trying to capitalize on positive Western views of glasnost and perestroika for the benefit of the Soviet Union.

These active measures are being coordinated by the new, capable head of the international department of the CPSU Central Committee, former Soviet ambassador to the United States Anatoly Dobrynin. Under Dobrynin's influence, Soviet "grey" active measures have become more sophisticated and cautious.

Regarding the KGB's activities, there has been no significant change in Soviet operations and active measures. Proactive anti-American disinformation campaigns and the spread of forgery continue unchanged, as does the extensive Soviet efforts to secretly manipulate the press. One of the most remarkable features of Soviet active measures in recent times has been the fact that sophisticated influential operations continue while the Soviets move forward with bilateral talks with the West, focused on the topic of glasnost and new political thinking.

These actions continue despite Mikhail Gorbachev's statement at the Washington Summit that he would no longer lie and there would be no more disinformation.

Soviet disinformation materials are not just vague articles cobbled together by sloppy Soviet reporters. They are deliberate lies, or distorted reports devised by specialists working for the First Chief Directorate of the KGB (KGB Intelligence). The international department of the CPSU Central Committee, the propaganda department of the CPSU Central Committee, the Soviet press, radio, press agencies, foreign communist party publications, the information departments of Soviet embassies and KGB agents around the world are all then involved in spreading these lies.

Often, a disinformation article by the Soviets is placed in some obscure newspaper in a developing country, reprinted by a Soviet periodical, and then distributed around the world by Soviet agencies. This allows the Soviets to claim that they are merely repeating what has appeared in the foreign press.

The Soviets also constantly scour the non-communist press looking for materials they can use for disinformation. They often spread the confused opinions of marginal extremist groups - as long as they suit Soviet objectives. In this way the Soviet disinformation apparatus regularly disseminates the views of marginal anti-American groups and extremists, and presents these opinions to the world.

Soviet disinformation specialists also regularly employ the method of citing recognized sources and individuals, but deliberately take the quotations out of context to such an extent that they fundamentally change their meaning.

In some major disinformation campaigns recently undertaken by the Soviet media and USSR-influenced media, it has been falsely claimed that the US government: 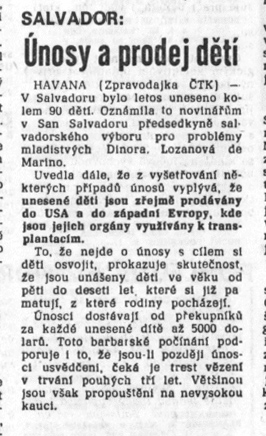 Though it is difficult to evaluate the effect of Soviet disinformation campaigns, the Soviet's continued efforts to spread such gross lies about the United States testifies to the importance they attach to them.

Soviet opinions on the usefulness of these campaigns were characterized by former deputy head of the disinformation section of the Czechoslovak Secret Service Ladislav Bittman. Bittman compared the consequences of disinformation reports to the effects of poison drops repeatedly administered to individuals over time. While the effect of taking a single drop is usually undetectable, the overall result may be fatal.

It is also worth noting that, despite Glasnost, several major Soviet disinformation campaigns were launched during the Gorbachev era, including the Jonestown campaign and the campaign regarding trade in the organs of Latin American children. Both of these campaigns began in 1987. Whatsmore, the disinformation campaign about AIDS effectively began during Gorbachev's time, in October 1985.