The first report of the US interagency working group on active measures from October 1981drew attention to the fact that Moscow, in confrontation with the United States in Africa and the Middle East, accentuated operations promoting friendship with Islamic countries. Their aim was also to demonstrate that the USSR was on good terms with Islam. In this context, Czechoslovak intelligence proposed, for example, active measure (AM) CHALAIS, authored by lieutenant colonel Zdeněk "Fučík" Fryauf of Section 36 of Direcotrate I.

Lieutenant colonel Zdeněk "Fučík" Fryauf (b. 1932)- joined the Ministry of the Interior in August 1953 as an "administration employee" - a professional dancer. He joined the service in 1957 and becomes a senior assistant chief responsible for artistic performances. In the summer of 1964, he moved to Section 1 (Americas). In 1969-1970 he worked at the residentura in Mexico. In October 1970 he was transferred to Section 3 of Directorate A (Afro-Asian Section; renamed Section 47 after the reorganization in 1971). He worked at the Cairo residentura as part of Section 47 from 1970-1976 and 1978-1980. In 1980, he joined the Active and Influence Measures Section (Section 36), where he remained until retiring on 31 December 1989.

The aim of AM Chalais was to:

The operation was not carried out in the end due to the termination of operative intelligence activities in connection with the changes brought about by the revolution in November 1989. Perhaps more interesting than the AM itself are the circumstances and reasons for its creation, which document the proposed method of implementation as well as the vassal-type relationship between the KGB and its "smaller sisters" from satellite communist countries.

"During a staff meeting between representatives of the active measures section of the VSB USSR (State Security Committee, the KGB - author's note) and Directorate I of the SNB in September 1984, it was agreed to together publish the book "IMPERIALISM AND ISLAM" to be distributed in the Middle East . This task was later also included in the planned measures of Directorate I of the SNB and recommendations of Friends to organize AMs in the field of militant Islam.
AM CHALAIS will fulfil the task approved by First Deputy Ministry of the Interior of the ČSSR Major General Alojz Lorenc as part of the review of measures of the Czechoslovak FMV in the field of Islamic matters. Interest in publishing the brochure was confirmed by Friends during a meeting in June 1987, where they also decided to sponsor AM CHALAIS. Previously, Friends had submitted their principal opinion on the content and some background materials ”.[1] 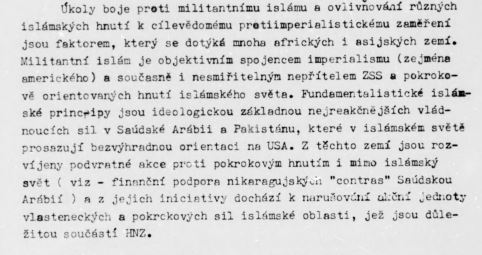 Active measure CHALAIS was to involve a 150-page book published in Arabic, written from the "position of liberal Islamic orientation". The publication was not to "attack the very essence of Islam as a religion", but to show the Qur'an as a"source of progressive social ideas”, the consistent implementation of which would lead to improvement in the economic and social position of the Islamic masses. Such concept of Islam is necessarily accompanied by the consistent anti-imperialist struggle of Islamic countries and movements. The book was to discuss the following issues in four chapters: 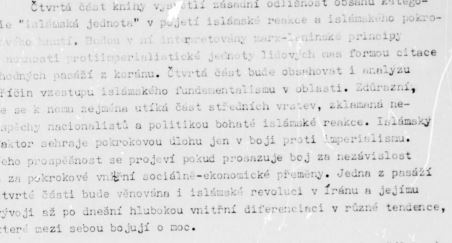 The manuscript of the book based on propositions and background materials from the Soviets was written at the end of July 1987. It was prepared by a Czechoslovak intelligence agent code named DOUDEK[3].

Doudek was a Palestinian, a member of the "left wing of Al Fatah" who, at the time of writing, was in Czechoslovakia, where his wife was from. For authoring the book, he was paid 6000 Kčs by the Czechoslovak intelligence service and the Soviets decided to pay the publication costs.

The book was originally to be published in Damascus, but the arrest of the publisher by the secret police there complicated matters and publication was postponed until the end of 1989, when it was not realized for obvious reasons. 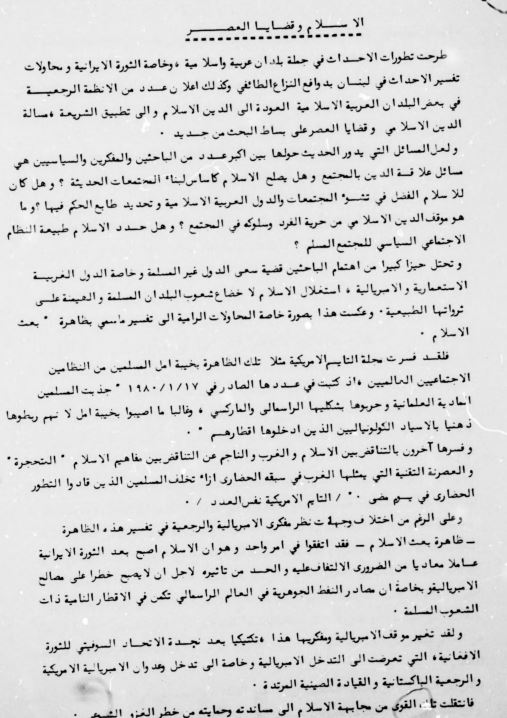 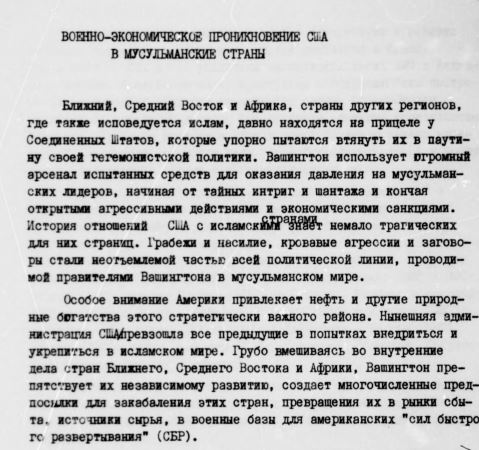