Surveilling the nation's correspondence as a part of information warfare

The contemporary term "information warfare", or its subcategory – "information blockade", can be broadly seen as the filtering of (undesirable) information towards (or away from) the public. Instead of online communication, in the past classical - analogue - post was an important source of information for controlling public opinion and the mood of the population within totalitarian regimes.

On the one hand, censorship, propaganda and agitation was used to pursue greater interconnection between the "masses" (the working class) and the Communist Party, while on the other hand was the fact that the largest social group "illegally" leaving the country was the working class. This fact did not match the official party line and propaganda of the Communist Party. The regime therefore did not hesitate to shoot those trying to cross the border, or to invade people's privacy. Up until as late as November 1989 the regime obtained its private information through the aforementioned clandestine correspondence control unit correspondence surveillance. This task was handled by Directorate VI of the FMV (Federal Ministry of the Interior) and special workplaces were set up at selected post offices in all regional cities. These workplaces were manned by StB personnel trained in this area. The surveillance of correspondence was largely focused on correspondence with "capitalist countries". This channel of information was an important source of news for the state security forces and the Central Committee of the Czechoslovak Communist Party. Before November 1989, Section 2 of Directorate VI of the SNB (National Security Corps) - Intelligence Equipment Directorate of the SNB - was in charge of this nationwide surveillance of the population's post.​

We can symbolically illustrate (dis)information warfare in the past through the person of former high-ranking official of the StB Col. Emanuel Havlík (see below), who held a number of important functions throughout his career, from chief of the disinformation section of Communist intelligence to chief of the above-mentioned Directorate VI of the SNB.

These "surveys" served as the basis for meetings of the political secretariat of the Central Committee of the Czechoslovak Communist Party and, among other things, demonstrate the secret police's capacity to check and analyse, for example, from 14 November to 28 November 1953 - 30,854 items of domestic post and another 22,347 items of international post, and from 28 November to 4 December 1953 to check and exploit 14,071 pieces of post, etc.

These “surveys” served as the basis for meetings of the political secretariat of the Central Committee of the Czechoslovak Communist Party and for its bulletin.
Source: ABS, ebadatelna.cz

Secret order of the Minister of the Interior Rudolf Barak dated 4 June 1954, criticism and remedial measures.

Reports of public response in 1967

In 1967, the Prime Minister of the Czechoslovak Socialist Republic, Jozef Lenárt, obtained weekly reports summarising the most important “responses” of the population obtained by clandestine correspondence screening.

Plan for cooperation between the Ministry of the Interior of the Czechoslovak Socialist Republic and the Ministry of State Security of East Germany in the field of correspondence screening for 1986 - 1990..

Fig. From the "Guidelines for the Use of Intelligence Equipment" of 12 May 1972

Prague workplace of the StB – Directorate VI of the Federal Ministry of the Interior for the secret examination of correspondence was located in the former central Prague post office on Gorky Square (today's Senovážní nám.). Below are some previously unpublished images of this workplace. 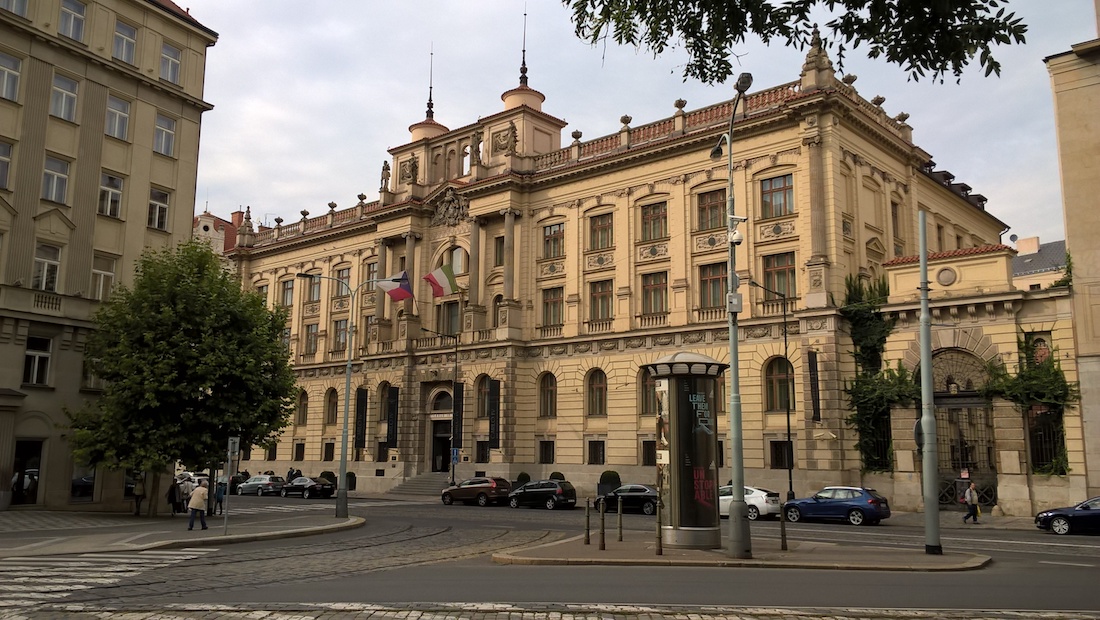 Fig. Present state – view from outside. 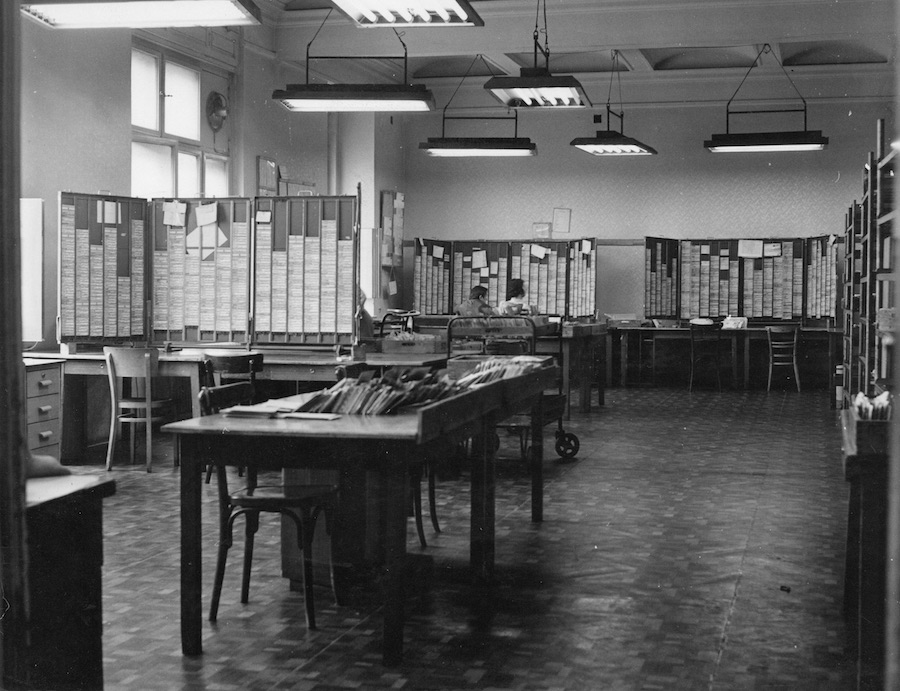 Among the devices and apparatus used by StB officers as operators within this workplace were technology of varying provenance, inter alia, Soviet apparatus REPRO-C64, for the reproduction and photocopying of letters and post. It was a simple desk with photographic and lighting equipment.

The "LAKE" device was used by the StB to unseal envelopes of letters sealed with water-soluble adhesives (starch, dextrin, etc.). The heating of water in two electrically heated tubs to 65 degrees Celsius resulted in water vapour diffusion through porous plates of sintered glass, filter paper and cellophane. An envelope could be opened in about 3 minutes. The device functioned without damaging the correspondence and was also suitable for unsealing post containing materials that might be damaged by higher temperatures, such as heat-sensitive paper, copy paper, photographs (black&white and colour), postage stamps, various stickers, etc. The device significantly reduced the risk of materials possibly sticking to other things or each other. This was also the advantage over using a steaming pot, which seriously damaged these postal items. It was not possible to unseal post and materials glued with synthetic and other water-insoluble adhesives (e.g. Kanagom, Revel-cement, UHU adhesive, etc.) on the LAKE device, because steam had no effect on the solubility of these adhesives. Similarly, it was not possible to unseal packages sealed with plastic tape made of synthetic materials (e.g. nylon, diofan, etc.). 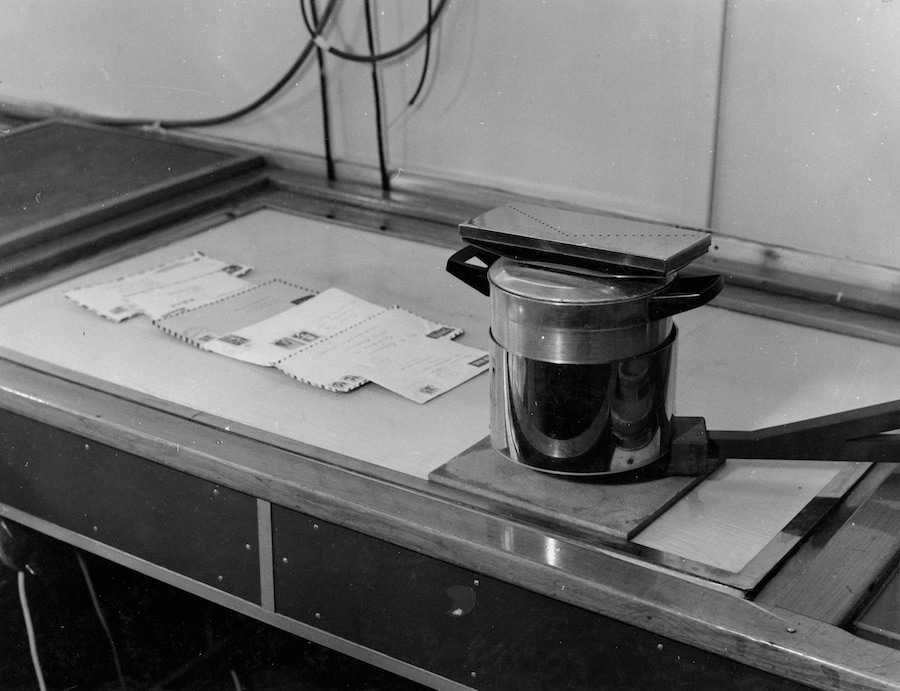 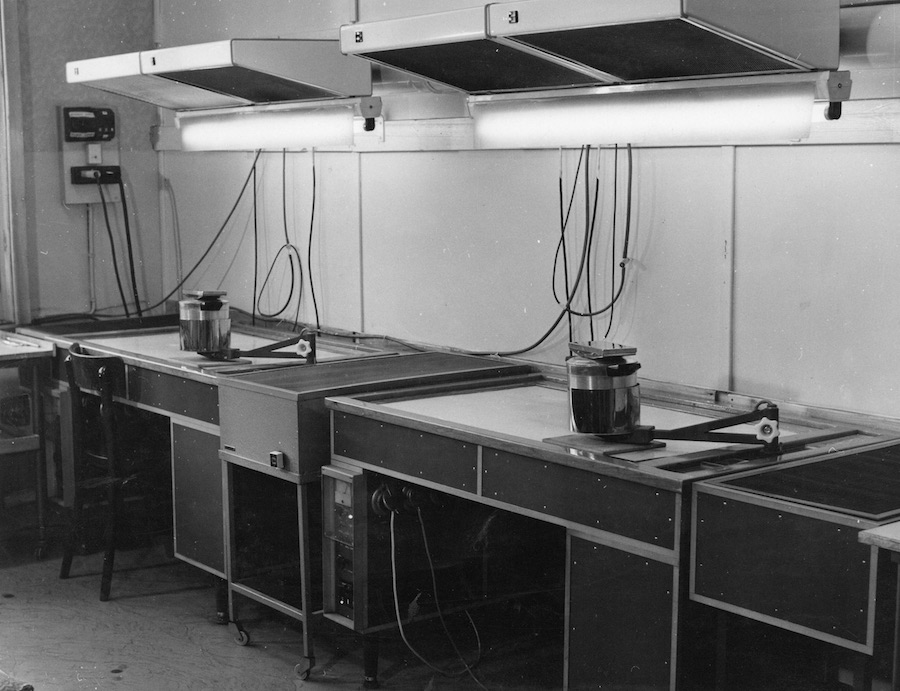 Fig. A wider view of the workplace for conspiratorial opening of post, Source: CDTR Archive 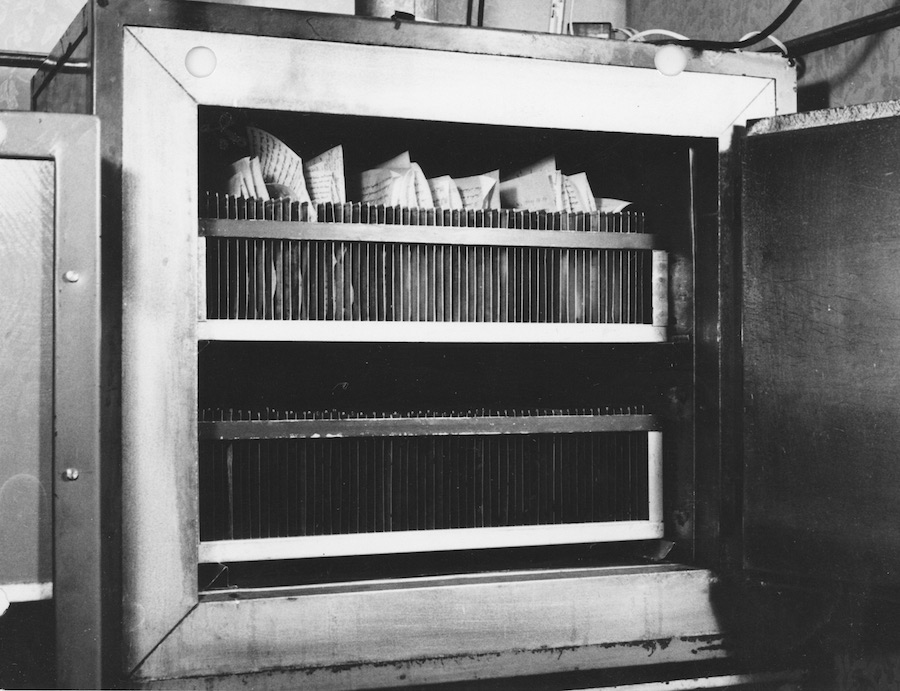 Fig. Part of the equipment was a device for drying post, Source: CDTR Archive

Another apparatus marked "18201" served in a similar way to the LAKE device to open specific types of packages - letters with symmetrical triangular flaps and a layer of glue that was highly soluble in water. Letters were stacked perpendicularly in a removable tray with capacity for 500 letters. They were then taken out of the tray one-by-one by means of a pressure suction and deposited at the first station of the conveyor belt. The conveyor belt then moved the letters to different processing stations (duration approx. 3 seconds). At the second station, the edges of flaps were sprayed with a solution, at sites 3-10, the letter was exposed to hot steam and finally a stream of air opened the letter.​

The RAILWAY machine was used for making prints (copies) of letters and printed materials in 300x400mm format for further processing by means of chemical examination of correspondence. The apparatus was placed on a table and connected to three-phase electrical power. The printed and printing materials on the carrier plate passed between the rotating rollers several times. The machine was operated by one worker. 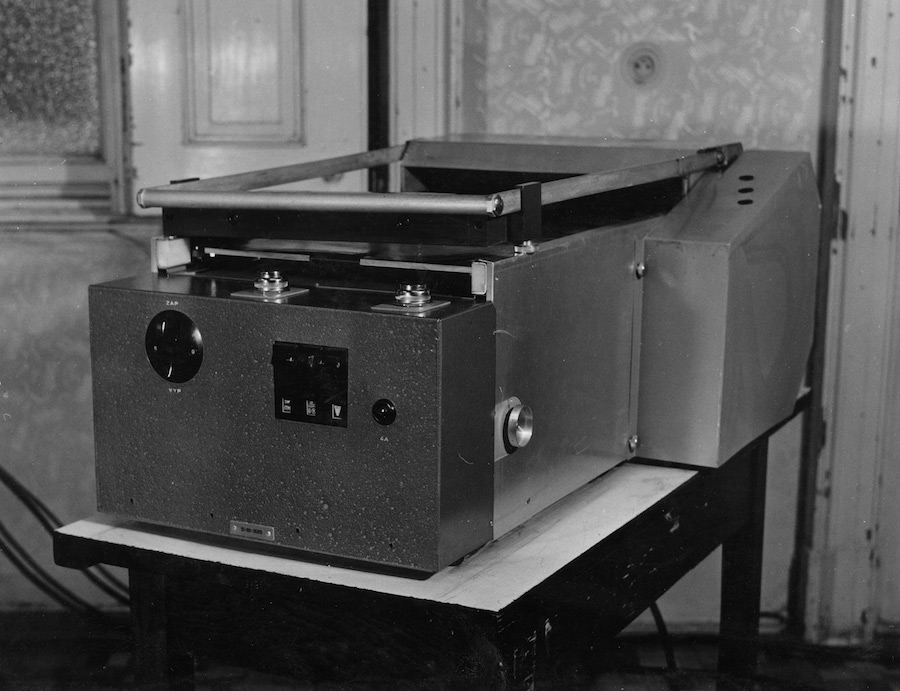 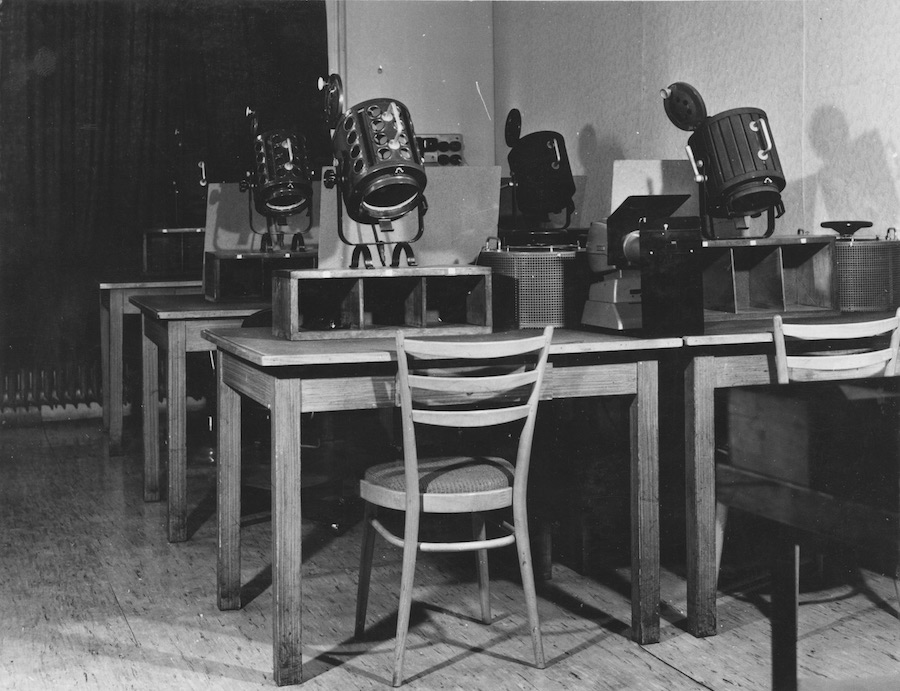 At the request of the FMV, the ZVS Research and Development Institute in Brno developed a desktop reproduction device for scanning flat materials. Eighty prototypes of this device were produced for the FMV. The SPEFO 8-2 device (see figure) was a desktop reproduction machine designed to capture A4 and A3 format materials on 35 mm non-perforated film. The size of the copy was changed by changing the lenses. Additional data (date, serial number) were placed on the edge of A4 documents when they were scanned. The length of exposure was selected using a switch on the instrument panel. Exposure was modulated with a pedal. The winding of film was done by hand. The device consisted of a scanning camera, cassettes, light box, interchangeable lenses and accessories. 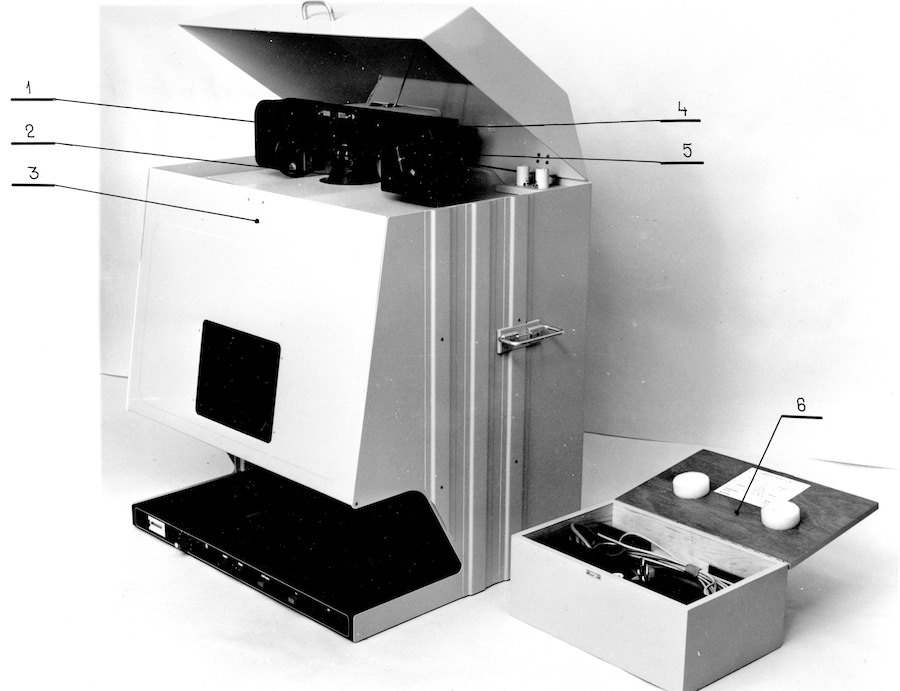 This apparatus was used for the comprehensive technical inspection of documents and consisted of a table, a vaporizer, a humidifier, a heater, a press, a pneumatic tool, a thermo-marker, lighting, a bottle holder, a cassette, a box for used foil for local lighting and a water tank. 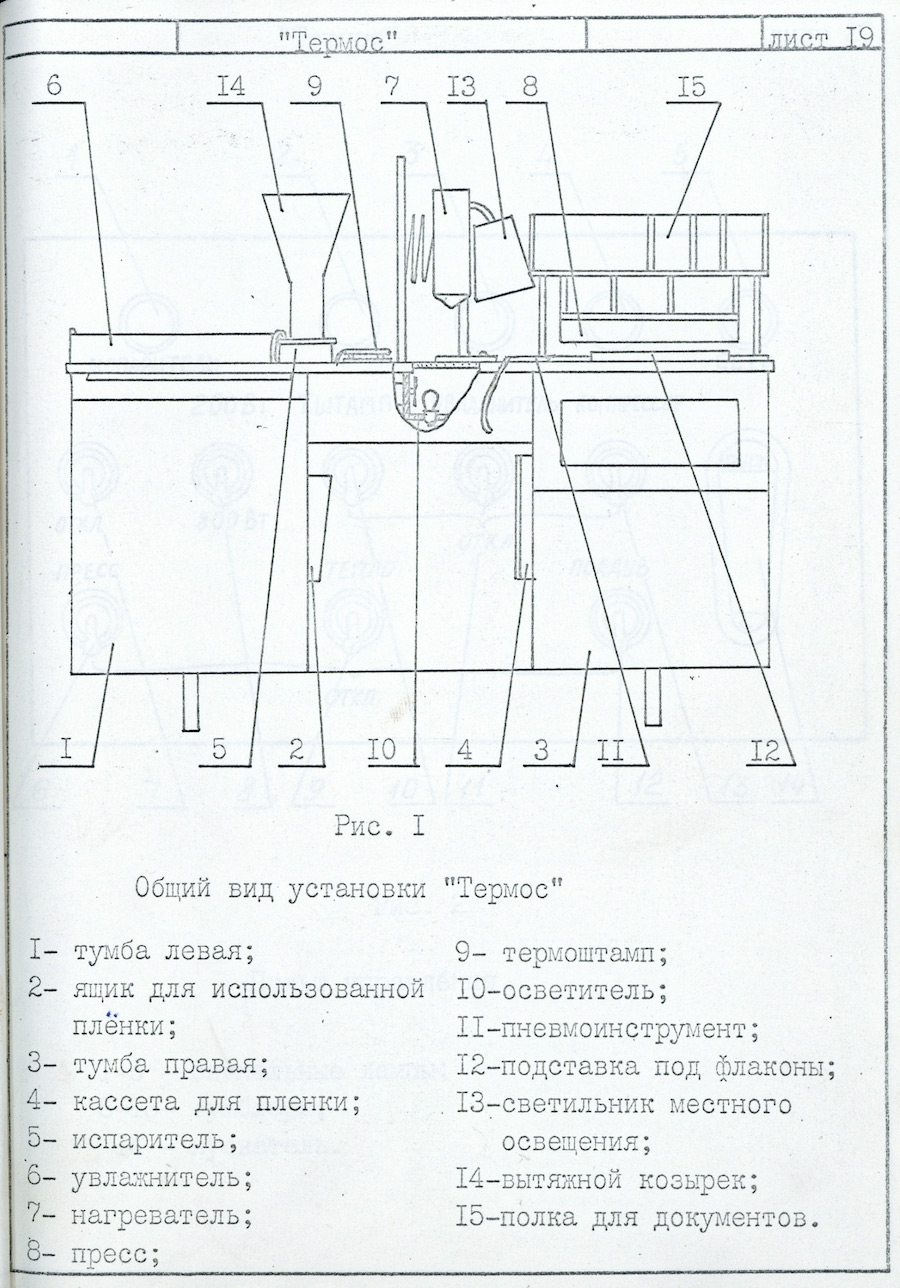 The CHEB apparatus (PLS 3 pneumatic table press, manufactured by Adamov Machine Works, national enterprise, Adamov, Polička plant) was used by the StB to reseal postal items, particularly letters. It was suitable for sealing all postal items glued with water-soluble adhesives. If all instructions were followed, it worked without causing any damage to postal items. (When gluing envelopes with synthetic adhesives, it could only be used for pressing postal items.) The machine was also able to press individual postal items and packages containing various enclosures (e.g. chewing gum, coins, razor blades, paper money, stickers, etc.). Compared to a hand-held bookbinding press, the CHEB machine had the advantage that it was possible to control the pressure it applied. Also, the actual operation of the press was simple and required no physical strain.

One CHEB was operated by one worker. The apparatus could seal approximately 250 - 300 letters an hour. This amount, however, was variable and depended on the worker's skill level, the proper organization of work, the diversity of the items to be sealed, and the number of letters that required extra attention when being sealed. 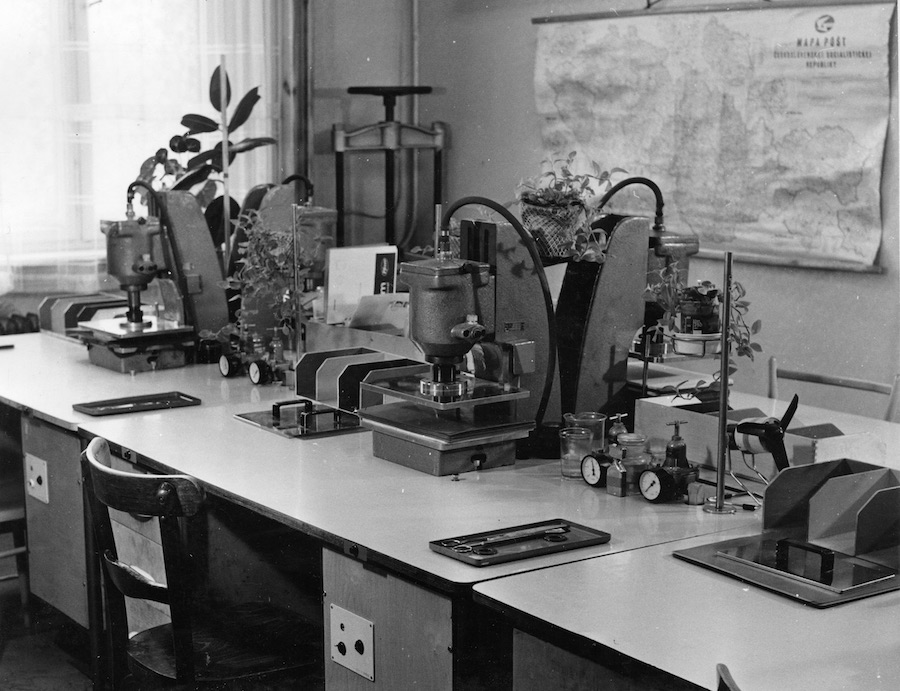 1 According to the plan of the Czechoslovak intelligence services, residents in Latin America directed their efforts against US objects by gathering political intelligence to uncover the intentions and interests of the US in the region, and to obtain information on the activities of local special services and their cooperation with the US. In addition, they provided political and economic news from countries where residents were not in place, recruited agencies with penetration into areas of interest (especially Czech and Slovak exile), managed agencies from third countries and arranged other operational activities (in cooperation with the KGB), laid the groundwork for furthering the interests of the socialist camp in the region, and performed activities in the field of scientific and technical intelligence (with the possibility of penetration into the US).