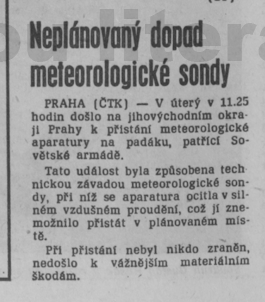 On Tuesday 16 February 1988 the Czechoslovak press office ČTK published a short information about a technical defect on a piece of meteorological apparatus which had landed on a parachute at 11.25 on the same day on the southeastern edge of Prague and which belonged to the Soviet army. “The event was caused by a technical defect during which the apparatus found itself in a strong air current which made it impossible for it to land on the planned site. No human casualties or injuries or any serious material damage were inflicted during the landing. Measures have been taken to prevent the recurrence of similar incidents.”

A day later, the party newspaper Rudé právo (Red law) reprinted the news from the ČTK on page 2 under the title Unplanned fall of a meteorological satellite. In the following days, a rumor spread among Czechoslovak citizens that a Czechoslovak MiG fighter had crashed.

What really “landed” on the nursery school in Prague 10 was no meteorological satellite, but an exploratory unmanned aerial vehicle of the Soviet army.

On the February morning, the temperatures were around freezing with a light southeastern breeze. At 11.25 before noon, a Soviet autonomous exploratory aircraft of the type VR-3 Reys (Tupolev Tu-143) weighing almost a ton fell on the building of a nursery school in Mládežnická street No. 1. Following a telephone call by citizens, patrols of the Public security (VB) arrived at the site in order to secure the area from passersby who had started gathering in the vicinity. The policemen found out that at the time of the crash the children from the nursery school had been out on a walk, leaving only the canteen personnel present in the building. Similarly, at the time in question there were no persons present in the vicinity of the entrance to the building where the machine fell, although there was a primary school in the immediate neighbourhood of the nursery school.  For purposes of securing the site of the incident, the members of the VB covered the plane to prevent possible photographs being taken. 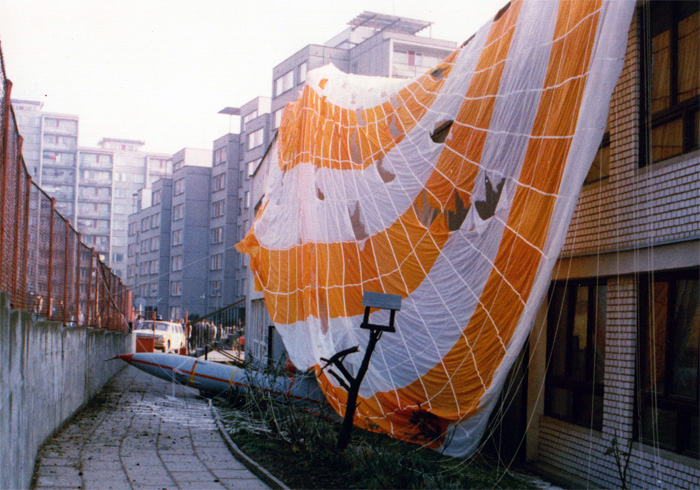 View of the crash site in front of the nursery school entrance (Source: Minulost.cz)

Without delay, the leading collaborators of the Federal Ministry of Interior, the State security and representatives of the KGB unit in Milovice were informed about the incident. A summoned unit of pyrotechnicians, a team of chemists and a radiation screening reported negative results. The Soviet side immediately dispatched specialists from the base in Milovice to transport the plane away. On behalf of the highest army posts, lieutenant general ing. Jozef Remek, Deputy minister of national defense and representative of the Ministry of National Defence responsible for the air force and anti-aircraft defense of the state arrived on the site. In his presence, the plane was loaded onto a lorry with the help of a mobile crane. Accompanied by a VB vehicle, the freight arrived in Milovice toward the evening. 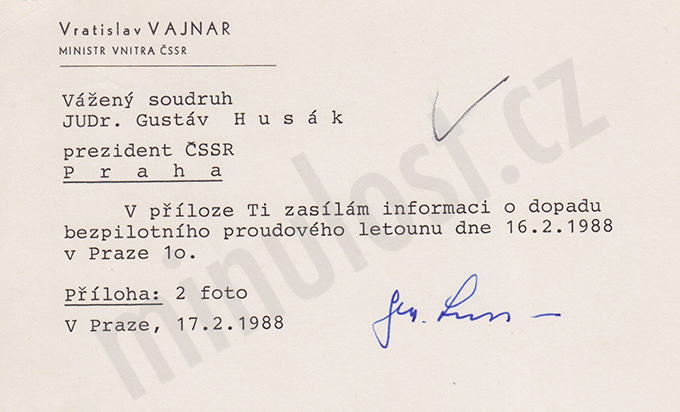 The State security documented the site of the incident. However, as it was a densely populated region with several concrete high-rise buildings directly overlooking the crash site, the incident took place immediately in front the eyes of the citizens of Prague. It was necessary to solve this situation somehow and so a Czechoslovak television team was summoned which shot scenes for the television to broadcast with the aim of calming the citizens of Prague, informing them that no damage had occurred to the property or lives of citizens. On the same day the ČTK published the abovementioned information with the legend about the fall of meteorological apparatus. 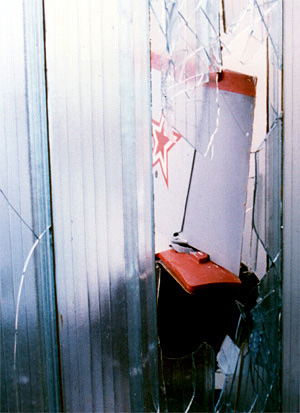 The sovereign mark of the Soviet army is clearly visible in the photograph (Source: Minulost.cz)

The next day, 17 February 1988, Federal minister of interior Vratislav Vajnar (dwelling on an official visit to Austria at the time) informed President Dr. Gustáv Husák, the supreme military commander of the ČSSR and Milouš Jakeš, Secretary general of the Central committee of the KSČ about the incident through his 1st deputy, general major Alojz Lorenc. Milouš Jakeš was on a visit to the Poldi Kladno factory on that day. The highest representatives of the Soviet military intelligence and the KGB were informed about the incident as well – army general Ing. Nikolay Petrovich Yemokhonov and army general Filip Denisovich Bobkov, 1st deputies of the Chairman of the KGB of the USSR; further the deputies of the Chairman of the KGB army general Vladimir Alexandrovich Kryuchkov, colonel general Geniy Yevgenyevich Ageyev, colonel general Vladimir Petrovich Pirozhkov and colonel general Mikhail Ivanovich Yermakov; the chief of the border armies of the KGB army general Vadim Alexandrovich Matrosov; chief of the Administration of the counterintelligence of the KGB colonel general Ivan Alexeyevich Markelov; lieutenant general Vitaliy Andreyevich Ponomaryev and the KGB representative at the Federal Ministry of Interior general major Boris Nikolayevich Voskoboynikov.

What was the Reys system?

The first unmanned systems for exploratory use started appearing in the arsenal of the armies of the Warsaw pact already from the end of the 1950s. The Soviet autonomous system VR-3 Reys belonged to the first generation of military unmanned systems from the cold war era. The system became part of the arsenal of the Soviet army and its allied armies (Syria and Romania) in the middle of the 1970s. The Czechoslovak people’s army also had two secret units at its command since 1985. The manufacture of the system took place in the USSR between 1973-1989. About 950 systems were produced altogether. 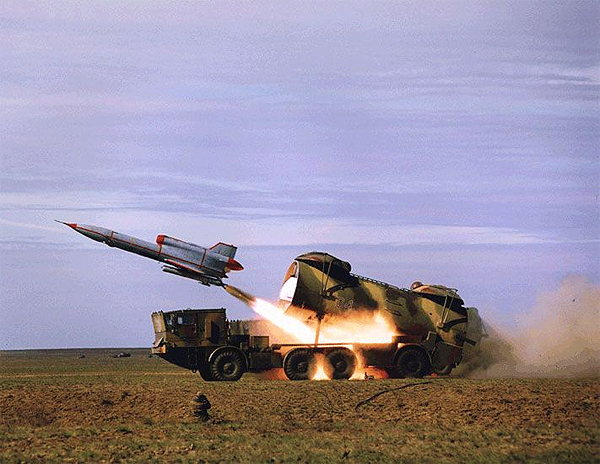 The launch of the exploratory system VR-3 Reys (Source: www.ruslet.webnote.cz)

The concept of the system was simple and strictly purpose-driven. The flight take-off weight of the aircraft reached 1,230 kg, its length was more than 8 metres, the wing span exceeded two metres and the maximum flight velocity was up to 950 km/h. The plane was also difficult to detect by radar. The flight duration was 13 minutes and the maximum flight range was 180 km. The altitude span within which the appliance could operate reached from 100 to 5,000 metres. The system was primarily used for photographic, (real-time) television or radiation exploration. It was also possible to use the aircraft for interfering with or destroying land targets .[1] The disadvantage of the entire system was that it was not possible to command the machine or to correct its flight trajectory after its programming and launch. After the end of its mission the machine returned to the launch site or to the expected descent site and the landing took place with the help of a parachute.

Meteorologists had forecast fog and low clouds for the morning hours on Tuesday, which were to disperse during the day with temperatures from -3 till +7 degrees centigrade and a light southeastern breeze of 4 to 7 m/s. Sometime shortly after 11.00 the Soviet commander gave orders to launch the drone whose flight coordinates had been programmed in advance. The anticipated return time of the system was 13 minutes later. The machine however did not return at the expected time, falling instead on a parachute into a residential area on the territory of Prague. A technical defect must have been the cause of this near fiasco of the secret military mission.

What was the military exploratory plane doing above the capital and above densely populated regions?  It can be presumed that the launch of the equipment took place at the Soviet base in Milovice. This is supported by the information about the return transport of the drone back into this military area with a Soviet crew. The plane was probably on its way back to the landing site, carrying sensitive data from the exploration, when something prevented it from reaching its destination.

If we extrapolate an imaginary aerial line from Milovice across the crash site in Mládežnická street, we arrive at the Brdy military area which was located within operational reach of the VR-Reys system. Here, in the confidential area between the villages of Míšov and Borovno, a Soviet military base was located (Javor 51), one of the three Soviet army depots on the territory of Czechoslovakia for storing nuclear ammunition (the deployment of Soviet nuclear weapons on the territory of the ČSSR was made possible by an agreement of December 1965). Was the unmanned plane carrying out an exploration of the region as a result or a part of military activities in this area?

The incident tok place two months after the signing of the Treaty on the liquidation of medium and short-range missiles (INF) by Soviet leader Mikhail Gorbachev and American President Ronald Reagan on 8 December 1987 in Washington. The document entered into force on 1 June 1988, but the Soviet side started the withdrawal of missiles from the territory of its satellites already in February 1988. On the same day when the news about the “meteorological satellite” was published, the Rudé právo daily brought an article on page 7 with the title Preparation for the removal of nuclear missiles.  Its topic is the preparation of the withdrawal of Soviet OTR 22 (SS-12) nuclear missiles from the territory of East Germany: “According to an announcement by the highest representative of the GDR Erich Honecker from the middle of January, Soviet nuclear missiles will be withdrawn from the territory of the GDR earlier than originally planned. In accordance with this decision, all missiles including the accompanying technical equipment have been made ready for removal.”

www.youtube.com</a>, or enable JavaScript if it is disabled in your browser.</div></div>

At this time, preparations were underway for the departure of the 122nd missile brigade with nuclear arsenal from Hranice na Moravě. On Thursday 25 February, the day of the fortieth anniversary of the “victory of the working people over the bourgeoisie and reactionaries” the party paper Rudé Právo published an article on the front page with the title Token of good will: withdrawal of missiles from the GDR and ČSSR starting today, saying that “the previously announced withdrawal of Soviet operational tactical OTR-22 missiles from the territory of the ČSSR” had started “even before the ratification of the Soviet-American treaty of 8 December.”

The past lies in Donbas

Fortunately, the incident from February 1988 did not leave any serious damage and the Communist power concealed it thoroughly, which indicates  - albeit indirectly – the activities of the Soviet armies at the time and their military exploration of the territory of the ČSSR. Soon thereafter however the situation changed and the occupation army was withdrawn after strenuous negotiations. The exploratory planes VR-3 Reys were discarded from the arsenal of the Czech army as technically obsolete and today they can be viewed in the Czech Republic and in Slovakia only in army museums (such as Kbely, Lešany and Piešťany), as a tangible reminiscence of the cold war.

However the drone can also be observed in a hot war today - on the territory of Donbas where this outdated system is being used by the Ukrainian army. It has also become an object of the media war, as indicated by videos on YouTube.

Peter Rendek (born 1976) – IT specialist and writer. In the past, he worked for the Slovak Nation’s Memory Institute and the Czech ÚSTR. He is Managing Director of the Centre for the Documentation of Totalitarian Regimes.