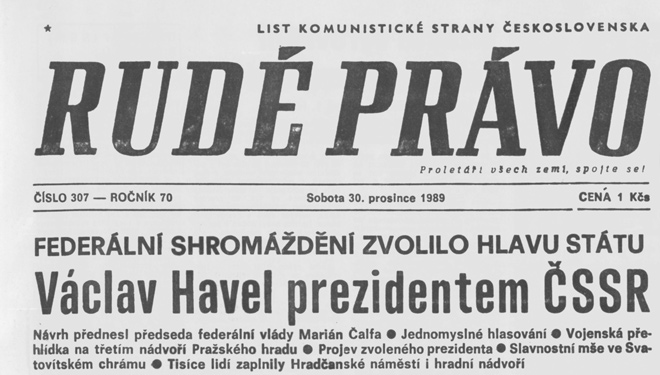 After a major political power reversal, triggered by the events of 17 November 1989, Czechoslovakia began to move towards democracy. On 29 December 1989, former political prisoner, dissident and critic of the communist regime, Václav Havel was unanimously elected by the Communist deputies of the federal assembly in the Vladislav Hall of Prague Castle as president of the Czechoslovak Socialist Republic, as it was still called at that time.In these turbulent times, Richard Sacher (ČSL – Czechoslovak People's Party) became the new Minister of the Interior the following day as a member of the Government of National Understanding under Prime Minister Marián Čalfa (KSČ – Communist Party of Czechoslovakia).Despite the wild shredding and later affairs associated with Richard Sacher, on 15 February 1990, he abolished the territorial units of the Communist political police the StB and replaced them the very next day with offices for the protection of the constitution and democracy in Prague, Ceske Budejovice, Pilsen, Usti nad Labem, Hradec Kralove, Brno, Ostrava, Bratislava, Banská Bystrica and Košice.[1] These cosmetic changes or changes in name and focus of individual departments did not bring about an immediate widespread reshuffling of staff of the new intelligence services. The transition period afforded members of the former StB the opportunity to come up with "new initiatives".

It was from this last regional town, more precisely from the territorial unit of the former StB from the regional section of the SNB (National Security Corps) Košice, that on 27 February 1990 an idea for a "remarkable" active or influence measure came, which was developed by Major JUDr. Vladimír "Tichon" Kurcina, who had worked for Czechoslovak intelligence from 1 August 1980 as a senior officer of the 1st Department of the Regional Section of ⟶ Directorate I of the FMV in Košice.

The aim of the influence measure, to be implemented through a Košice television news crew, was to support the positions promoted by the new President Václav Havel on behalf of Czechoslovak citizens.The point was that "in the interests of political stability" it was necessary for Soviet forces to leave Czechoslovakia as soon as possible. Maj. JUDr. Kurcina pointed out that a broad-gauge railway track led to the VSŽ (East Slovakian Ironworks) compound from the Soviet Union, which had previously been actively used by the command of the central group of the Soviet army in the moving of military machinery and men.At that time, the Soviet command had been claiming that there were "objective" difficulties in moving troops and technology quickly and had "forgotten" about this possibility.

Based on the proposal, the Košice television news crew were to shoot an opinion piece with VSŽ rail transport workers in support of Czechoslovak interests.[2] Maj. JUDr. Kurcina evidently had his own ideas about ​​how to produce television news in the new post-revolution era, where it was necessary to "fight" a new opponent, who had been a "Friend" a short time before.In any event, Maj. Kurcina's proposal was rejected in the style of URGENT! IMMEDIATELY OUT OF CONTENTION by the Deputy Chief of Staff of the intelligence service of the Federal Ministry of the Interior (FMV) - successor to Directorate I of the FMV, Maj Ing. Pavel Zvara.The reply stated that the proposal did not line up with the focus of the FMV intelligence service, but that the Košice regional administration could apply for possible implementation within its own competencies by means of the official procedure of the Federal Ministry of the Interior.[3] The authorized drafter of the response for the Košice department was himself a consultant on the proposal, Major Stanislav “Meisner“ Brašna from Section 36 of the FMV intelligence service - one of the most active creators of disinformation campaigns of Communist intelligence in the 1980s.

confidential
out of contention

After prior consultation with an employee of the section, Mr. M a i x n e r [actually Meisner – author's note], I propose the following IM:

Objective: By way of a television news report, to support the position of President Václav Havel put forward on behalf of the vast majority of Czechoslovak citizens, that it is in the interests of political stability that Soviet forces leave Czechoslovak territory as soon as possible.

At press conferences, command of the central group of soviet army has claimed especially the shortage of rail carriages necessary for the withdrawal, as well as the difficulty of reloading military equipment and ammunition at the reloading railway station in Čierna nad Tisou and Čope.

The soviet leadership is trying to extend its stay in Czechoslovakia due to "objective reasons".

This is not a matter of indifference to our people, and in his speeches to the public, President V. Havel rightly promotes the opinion of the vast majority of Czechoslovak citizens, and even that of citizens of other countries, that it is in the interests of political stability for Soviet forces to leave Czechoslovak territory as soon as possible.

Method of execution of IM:

Tomorrow, i.e. 28.2.1990, after approval of the proposal, a Košice television news crew would film interviews in the VSŽ Košice compound, Doprava plant, with railway transport workers who would:

The filmed documentary meeting the objectives stated in the IM proposal would be included in national television news, as well as other broadcasts.

Financial costs: we do not expect the realization of the IM to involve any expenses.

Dangers and risks: No danger. The IM would be carried out by the regional office of  Košice television news. It is assumed that the documentary will also be broadcast by other Eurovision member states.

Video
Vorobjov: Many soldiers could not comprehend why we have to leave (source: Czech TV24)

8 February 1990
Moscow 8 February - Obviously, any unjustified delay in the withdrawal of Soviet forces from Czechoslovakia threatens the rise of hostile sentiment among the Czechoslovak population and would serve as an effective weapon in the election campaign. Local correspondent based in Prague Leonid Kornilov reported in the newspaper IZVĚSTIJA.
He reported on Tuesday's rally in Old Town Square in Prague where thousands demanded that the withdrawal of Soviet forces from Czechoslovakia be sped up using, as he puts it, not always the politest words and slogans. He also quoted one of the participants in the rally who told him that this action was necessary, "because we do not believe that in the current negotiations between the Soviet Union and Czechoslovakia the USSR would agree to withdraw its forces".
L. Kornilov also drew attention to Monday's protest by several hundred people at the Soviet embassy in Prague. He noted that it was only at the mission building that the demonstrators were surprised to learn that talks on the withdrawal of the army were ongoing in Moscow on Wednesday and that the Embassy Council refuted their information about the alleged disruption of Soviet oil supplies to Czechoslovakia in response to the removal of troops.
The easiest way to deal with these facts is to mark them as manifestations of anti-Sovietism. There are rumours, there is ignorance, there are fears. All this, however, needs to be explained to the people, wrote L. Kornilov in conclusion.

30 September 1990
Čierná nad Tisou, 30 September - According to an international agreement, more than 50 percent of Soviet soldiers and civilians, 70 percent of tanks and artillery and 80 percent of aircraft have been removed from the CSFR. On the last weekend of September, another three trains with people and equipment from the Zvolen unit were dispatched from the reloading station in Čierná nad Tisou to the Soviet city of Čop, bringing the total to 402.
The speed of withdrawal is limited by the lack of carriages on the Soviet side, so only 1-2 trains can be dispatched every 12 hours, operation supervisor Anton Deško told the Czech News Agency.